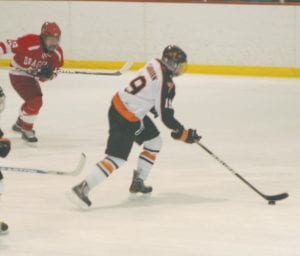 FLINT TOWNSHIP— The Raiders continued to find success on the ice when they met up with Goodrich last Wednesday, defeating the Martians, 2-1. Nick Brazeal scored both goals for Flushing to help lead the Raiders to the victory. Drew Sanborn picked up an assist on the night.

Hughes scored at the 7:36 mark of the first period assisted by Bushnell, but Flushing tied the game at 5:20 in the second. Flushing took the lead when Nick Brazeal scored his second goal of the night at :58. Goodrich pulled its goalie, but was unsuccessful. Bradshaw stopped 23-of- 24 shots for Flushing, while Larsen stopped 22-of-24.

“We were playing without Matt Nagy, Kevin Wilson, Michael Livingston, Jordy Makranyi and Mickey Montpas, so I was extremely proud of the boys for stepping up and earning a victory,” said coach Jon Jepson. “Out of the six kids that did play, three of them were kids that normally do not see as much ice as others.

“Nick Yencer, Dewey Miller and Jeffery Fisher played great games, everyone needed to play well and we did.”