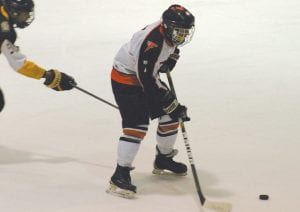 Flushing/Carman-Ainsworth’s Jeff Fisher looks at his options with the puck.

FLINT TOWNSHIP — The Flushing/Carman-Ainsworth co-op hockey squad traveled down to the Hartland Sports Center on Saturday for a match up with the Metro League Griffins, also a co-op squad, comprised of Fenton and Linden. Flushing proved to be too much for the Griffins in a dominant 6-1 win.

The Raiders’ Joey Montpas would get the only goal of the opening period, firing it home off of a pass from Jordy Makranyi at 10:12. The second period, however, would produce an offensive surge that the Griffins could not overcome. It began with Mickey Montpas lighting the lamp at 11:40 with an assist credited to Jeff Fisher.

With 7:52 remaining in the frame, Makranyi and Dewey Miller set up Wes Livingston’s goal to increase the Flushing advantage, 3-0. After that, Drew Sanborn put on quite a show to cap the period, scoring twice in 37 seconds. Sanborn tallied with 7:39 remaining on assists from Fisher and Mickey Montpas, then repeated the feat with 7:02 remaining thanks to assists Mickey Montpas and Dan Olson.

Already leading, 5-0, the Raiders piled on one more with Joey Montpas rippling the mesh. Assists were credited to Makranyi and Fisher. The Metro League Griffins got their lone goal late in the third when Nate Allen scored from Luke Elfstrom. Goaltender Hayden Smith turned aside 10 of the 11 shots directed his way.

The win over the Griffins was a bounce-back victory after suffering a 7- 2 loss to the Bay City Wolves on Wednesday at Iceland Arena. Bay City held a 2-1 lead following the opening period, and still held the one goal edge after two, 3-2. The third period, however, is when Bay City ballooned its advantage with four unanswered goals in the frame.

Jordy Makranyi got on the board for the Raiders, as did Mickey Montpas, scoring Flushing’s only two goals of the game. Smith faced a barrage of shots, and did quite well, stopping 50 of Bay City’s 57 shots on goal.

The Raiders will now travel to the Polar Palace in Lapeer today to faceoff with the Lapeer co-op squad, consisting of Lapeer East and Lapeer West.