Raiders turn things around after rout against Davison 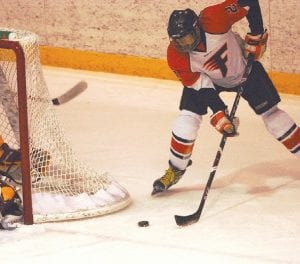 Matt Nagy looks for his shot during a recent contest.

Davison came out prepared and made Flushing pay for every mistake it made. Steven Stull put Davison on the board at 9:03 assisted by Bobby Crawford in his first game as a Cardinal and Nick Goettel. Brandon Pirtle then scored at 8:22 from Gabe Schiller and Drew Vandeputte. At 4:12, Davison would increase the cushion to 3-1 off a Schiller goal assisted by Vandeputte.

Flushing was unable to score in the second, while Davison’s Aaron Snyder scored from Pirtle and Mike Allard.

In the third, Flushing continued to struggle, but Davison kept on rolling with Snyder scoring assisted by Goettel and Allard. Flushing would finally light the lamp at 11:49 when Dan Olson fired in a shot from Matt Nagy and Mickey Montpas, but Davison tacked on one final goal at 5:16 when Crawford scored from Goettel and Stull.

“They just skated better and we made simple mistakes that good teams like Davison take advantage of,” said Flushing coach Jon Jepson. “Davison just plays such a disciplined game that if you get off your game they make you pay.”

The ship would be righted on Saturday when Swan Valley was the opponent, with Flushing pulling out the much-needed 8-3 win.

Nagy put one between the pipes at 14:47 from Olson and Joe Anderson to give the Raiders the confidence boost it had been missing. At 11:12, Olson scored from Anderson and Nagy, then at 6:47 Matt Leland scored off a feed from Anderson. Leland ended the first-period scoring off a pass from Anderson.

Blake Shafsnitz kept the momentum on Flushing’s side with a goal at 13:52 in the second assisted by Makrani. With four seconds left in the period Leland scored from Hunter Miller to put Flushing up, 6-0.

Swan Valley would finally get on the board at 11:21 when Kyle Flattery scored from Aiden Ray, but Flushing had the answer when Nagy scored from Montpas and Makrani at 10:32. Swan Valley wasn’t unsettle, but still had a large hole to dig out of. The team scored at 4:17 when Brian Fisk fired in a shot from Hunter Wunderle and Nathan Bryant. Flushing tacked on a goal at 2:56 from Olson fed by Leland and Miller and just to show that it wasn’t out of gas, Swan Valley scored with four seconds left with Scott Burrill assisted by Lucas Drapp.

“We just had a lot of jump in our step and it helped us because we have been struggling our last six games,” Jepson said. “Swan Valley came out a little flat, but Leland, Nagy and Olson came out hot on our first line and that really helped our confidence. It’s good to see our goal scorers come back out with Leland back on track with a hat trick. The boys played very well.”

Flushing battled Kearsley yesterday at Iceland Arena in Flint, then takes on Goodrich Saturday at 5:45 p.m. at the Polar Palace.