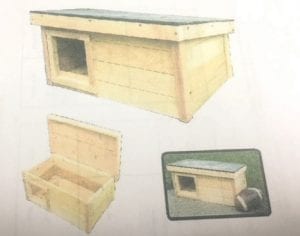 Ruth Cantor, director of the Genesee County Humane Society has because of the quality of the dog houses being built at the shelter Jan. 15, dogs will be able to withstand cold weather.

BURTON — The Humane Society of Genesee County recently founded Raise the Woof to make the world a better place during the winter for area dogs and their owners.

“We received 15 complaints during the first three days of the year alone,” Schmieder added. Every one of these complaints consisted of animals left outside in the cold.”

Ruth Cantor, director of the Humane Society of Genesee County, said the law requires dogs have adequate food and shelter.

“That shelter could be a barrel,” she said. “Some people throw a blanket out there, but blankets absorb moisture. They aren’t good for bedding. David delivers straw to people who are trying to do the right thing.”

Schmieder said if the temperature is freezing, the animals need to have dry bedding. He said cold temperatures can cause animals to lose body heat.

Schmieder said one case is in court now concerning this.

“I found a dog that was frozen solid and died outside last February,” he said, “The dog was in a dog house with no bedding.”

Mari Brooks, humane education and community events coordinator for the Humane Society of Genesee County, came up with an idea for the shelter to raise money to build dog houses for area dogs in November. She presented the idea to Cantor, who thought it was a good idea.

“One reason I thought Mari’s idea was good is Habitat for Humanity built seven dog houses last year, but we could have used more,” Cantor said. “It would be nice if David could have a supply of dog houses to donate to people who he investigates for cruelty cases that just can’t afford the houses. Also, sometimes animal owners call and say they can’t afford a dog house and will ask us to help.”

The original goal of Raise the Woof was to make 10 dog houses, which cost $175 each to make.

However, the Humane Society was awarded a $5,000 grant to assist them with their endeavors from the Community Foundation of Greater Flint, on Jan. 4.

“This will allow us to increase the number of dog houses we build, as well as provide dog food and an initial supply of straw,” Cantor said.” We’re very excited we will be able to help even more dogs get adequate shelter!”

The Humane Society of Genesee County posted Raise the Woof on their Facebook page, listing the materials needed and accepting monetary donations. At least $375 was collected because of this.

Dog houses will be built Jan. 15, on Martin Luther King, Jr. Day at the Humane Society of Genesee County, on Dort Highway, and at the Habitat for Humanity Restore, on Burton Street, in Flint.

The dog houses have shingled roofs that are removable for easy cleaning and removing the bedding. They are designed with an entryway and a sleeping chamber, and are lifted 2-3 inches off the ground.

The community is asked to share the post from the Genesee County Humane Society Facebook page, to donate at geneseehumane.org specifying it’s for the dog houses or call 810-744-0511.810- 744-0511 to volunteer or for details.