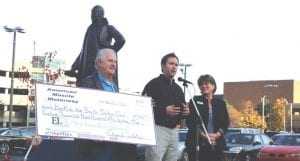 Steve Wolbert (center), Diplomat Pharmacy community relations liaison and Cheryl Sclater (right) Business and Community Development manager for ELGA Credit Union presented Al Hatch, Back to the Bricks Chairman, with a check for $12,950. The money will go to the development of another bronze statue.

FLINT — ELGA Credit Union and Diplomat Specialty Pharmacy presented a check for $12,950 to Back to the Bricks founder Al Hatch at a press conference in downtown Flint at the Kearsley Street Lot, Oct. 24.

A statue of David Buick is getting ready to be placed on Saginaw Street along with William “Billy” Durant.

According to Hatch, an anonymous donor is covering the costs for the Durant statue, which will be finished after the compeletion of the Chrysler. Hatch plans on announcing the donor in November.

The statue of Billy Durant will be unveiled next August at the 9th Annual Back to the Bricks Cruise and Car show.