Rally against The Family Puppy set for Saturday 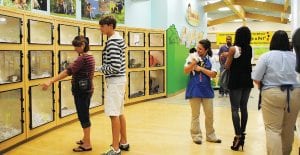 A peaceful rally against The Family Puppy, a pet store inside Genesee Valley Center, is planned for noon-3 p.m. Sept. 18. Puppy Mill Awarenss, the group holding the rally, wants the store to stop selling puppies and promote adoptions.

FLINT TWP.
— A Puppy Mill Awareness group is holding a peaceful rally noon-3 p.m. Sept. 18 against The Family Puppy, a pet store located in the Genesee Valley Center. Pam Sordyl, organizer and founder of the rally, said the focus of the rally is on “the fact that The Family Puppy and their other chain stores, The Family of Pets, continues to work with brokers and mass-producing commercial breeders whom the USDA (United States Department of Agriculture) has cited for violations of the Animal Welfare Act.”

Sordyl said the group wants to warn the public about the store, and what is going with the breeding facilities used by the store.

“We don’t want to close the store, or not have the mall kick then out,” she said. In January, Sordyl and the group met with mall management, asking the Genesee Valley Center to investigate The Family Puppy. “They said they were comfortable with them, and would honor the lease,” she said.

According to a press release, the Puppy Mill Awareness Group said it conducted its own investigation, revealing that The Family Puppy has worked with breeders from Minnesota, Missouri, Indiana and Ohio in 2009 and 2010. “The United States Department of Agriculture’s Animal and Plant Health Inspection Service (USDA APHIS) records revealed unacceptable conditions for breeding dogs.” The press release cites one breeder, Lavern Whetstone of Riverbend Kennels in Indiana, who was cited for cleaning and sanitizing violations in August 2010, and states that Whetstone is one of The Family Puppy’s primary breeders and has shipped 77 puppies between June 9, 2009-Jan. 1, 2010.

Sordyl said she sent a letter to John Stottele, who owns The Family Puppy with his wife Debbie, in addition to calling him in February and July.

“He said he did go look at the breeders, and he declared it unfair to ask him to stop selling puppies,” she said. “We don’t want him to mass produce puppies, we want the goal to be supporting homeless puppies. This is not a negative campaign, and we don’t want to hurt the mall. We are trying to take a positive approach by asking the pet store.” So far, Sordyl said an online petition has garnered more than 1,000 signatures.

When asked about the pending rally, Stottele said he was aware of it and had been making efforts ahead of the rally to keep people updated through a press release and media alert. The couple will be at the store on Saturday, and can discuss the required standards they have demanded as a retail operation to ensure that dog breeders are making a clean, healthy and pleasant environment for their dogs, instead of turning to sub-standard breeders to obtain dogs for sale.

Stottele said 90 percent of the puppies come from Indiana, and he receives them from 19 Amish breeders. Based out of Novi, The Family Puppy, was established in 1998 and Stottele said when the company first opened, it was a full-line store with all animals.

“We decided eight years ago to do something different, so we discontinued all animals but puppies and kittens,” he said. “This gave us more time to seek out breeders who were doing things well. We tell breeders our regulations, and we visit breeders. In Indiana, we like their work ethic. The Amish are hardworkers, and there is a lot of interaction with the dogs because the moms are stay-at-home and the kids are home-schooled.”

When it comes to choosing breeders for the store, Stottele said visit breeders. “If the kennels are okay, but need some work, we give them a list of things to fix before we meet again,” he said. “When they meet the criteria, then we go back.”

In regards to Sordyl’s investigation claim on Whetstone, Stottele said the breeder is still a supplier to The Family Puppy and that Whetstone had moved to a new facility, and was given a blueprint from The Family Puppy as to what was required.

“Lavern’s infraction with the USDA was in the outdoor kennels,” Stottele said. “There were two beagles, and dried feces had gone under the grate in the cage. The USDA inspector wrote him up for that because he hadn’t cleaned the washdown yet. The USDA is getting tighter on regulations, which is good. Lavern corrected the situation while the inspector was there.”

Unlike other pet store owners, Stottele said he has visited Whetstone’s home, and that Whetstone is in the process of getting a new kennel. “We’re okay with that,” Stottele said.

Stottele admitted that in the past, the store purchased bought from distributors, but now the store buys puppies directly from breeders. He believes Sordyl’s position of stop selling puppies and promoting adoptions is “staunch” because “the public deserves to make a choice.”

“We want people to go to the shelter, but not every family can adopt a dog,” he sad. “The options are one, get a dog from a show breeder; two, get a dog from a casual breeder; three, go to the shelter; or four, go to a pet store that works with a professional breeder. But to say you can’t shop and only adopt is not fair. We all need to work for animal welfare, and that’s what we do.”

Despite the store’s procedures, Sordyl said the rallly, which has more than 60 RSVP attendees, will help bring more public awareness. Those wishing to join the rally need to bring their own signs, and the rally will be conducted on public easements outside of the mall. Sordyl said local law enforcement is aware of the event.

For more information on the rally, visit www.meetup.com/detroit-puppymill