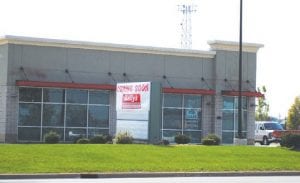 Rally’s, a drive-thru restaurant chain with several locations in Genesee County, has placed signs in front of the building, located at 4455 Corunna Rd., and crews are working inside on the space.

Tracey Tucker, economic enhancement director for Flint Township, said the township has received applications for the permit from the company approximately one week ago.

Although there is no timeframe for when Rally’s will open, Tucker said the restaurant chain needs permits from the township, Genesee County and Genesee County Health Department.

Starbucks vacated the building in the summer of 2008, after the corporation released a list of approximately 600 locations across the United States that were scheduled to be closed.

Checkers®/Rally’s® is the nation’s largest chain of double drive-thru restaurants. The restaurants feature two drive-thru lanes and a walk-up window at the company’s more than 800 locations. Details: Visit www.checkers.com.