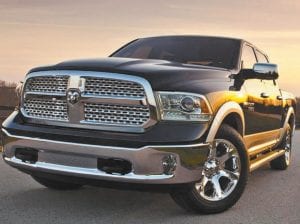 The new Ram 1500 has been named 2013 North American Truck/Utility of the Year by a panel of 49 automotive journalists from the U.S. and Canada who serve as the voting jurors. The winners were announced at a news conference last week at the North American International Auto Show in Detroit.

“For the Ram Truck Brand, this ranks as one of the proudest days in our history,” said Fred Diaz, president and CEO – Ram Truck Brand and Chrysler de Mexico, Chrysler Group LLC. “Every truck-maker aspires to win the North American Truck/Utility of the Year. I tip my hat to the folks who worked behind the scenes to make the 2013 Ram 1500 a technological triumph.

“In no other truck will you find Ram’s incredible combination of best-in-class fuel efficiency – 25 miles per gallon – Pentastar and HEMI engines matched to TorqueFlite 8-speed transmissions, air suspension.

Ram engineers say they changed every area of the truck – from a newly designed frame to new engines and transmissions to a new interior with the next-generation Uconnect access system. With excellent ride and handling and aerodynamics, the 2013 Ram 1500 delivers great content, performance and capability to truck buyers, Ram spokespeople said. After considering dozens of vehicles this year, the jurors finally narrowed the field to the 11 cars and 10 trucks/utility vehicles on which they voted.