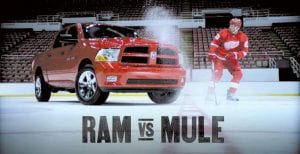 The expanded partnership for 2012-13 includes the addition of two Ram Truck and Red Wings-themed displays on the exterior of the Joe Louis Arena. The 26-foot-by- 100-foot building identifiers will be placed on both the east and west exterior walls to welcome fans to Joe Louis Arena.

“We are very pleased to expand our relationship with Ram and create an enhanced visual to the outside of Joe Louis that welcomes our fans,” said Tom Wilson, Olympia Entertainment president. “We are proud of the partnership and all that we are able to accomplish together.”

“The hard work, fighting spirit and determination exhibited by the Detroit Red Wings embraces the values shared not only by Ram Truck but also by the brand’s dedicated customers,” said Mike Dragojevic, director, Great Lakes Business Center. “We are pleased to once again be named the ‘Official Truck of the Red Wings’ and build upon the partnership for the 2012-13 hockey season.”

Other continued elements in the partnership include: television and radio spots narrated by Sam Elliot, the voice of the brand, and featuring Red Wings forward Johan “Mule” Franzen; a Ram Truck mural inside Joe Louis Arena featuring goaltender Jimmy Howard; concourse curtains of the Ram Truck grille, and more.