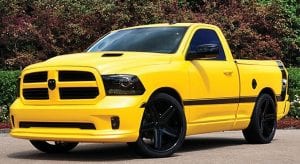 Ten years ago, the Ram Truck Brand introduced the Rumble Bee, a popular model inspired by the Super Bee muscle car of the late ’60s.

“The Ram 1500 Rumble Bee continues to have a strong fan base and what better place to celebrate its 10-year anniversary than Woodward Dream Cruise,” said Reid Bigland, president and CEO – Ram Truck Brand.

The Rumble Bee concept began life as a 2013 Ram 1500 R/T. Keeping with tradition, the light-weight, two-door, 2WD configuration is covered in “Drone Yellow” paint with a unique matte finish, said Nick Cappa, Ram brand spokesman. The rare color/finish flows over the entire truck including the bumpers, flares and the Mopar ground effects kit.

Bee” design is swathed on both sides of the truck within a gloss black stripe that fades into honeycomb.

“After people saw the vehicle, the first question I always heard was, ‘Is it going into production?’” Cappa said. “My boss, Bob Hegbloom, director of Ram Truck Brand, said that right now there are no plans, but if the public shows enough interest in the vehicle, it’s something the company will consider as a real possibility.”

“We build these concept vehicles for a couple of reasons. We do this because people enjoy it when we design vehicles outside the normal production focus. Secondly, it deepens the designers’ love of designing when they can put something on paper and move it to the pavement in a matter of weeks.”