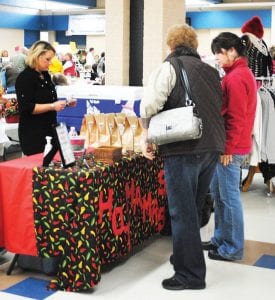 Margeaux Rumbel, creator of Hot Mama’s Salsa, gives customers a sample of her one-of-a-kind salsa during the craft show.

FLINT TWP.
— For 35 years, Randels Elementary’s Craft Show has provided a place for the community to get a jump start on the holiday shopping season, and also help support the students at the school.

On Nov. 6, the school continued its tradition at Carman-Ainsworth High School, welcoming approximately 800 people into the event. Organizer Cece Roiter said 103 vendor spaces were rented, and the show featured a variety of arts and crafts, jewelry, baked goods and other food items. The event, which helps raise funds for the school, was initially held at Randels Elementary for the first two years.

“Within two years, we outgrew Randels and moved here to the high school,” Roiter said.

This year, Roiter said the goal was to raise $5,500 for the school but when the figures came in, the craft show raised approximately $3,500. “I’m happy because it all goes back to the kids,” she said.

Next year’s Randels Elementary Craft Show will be held on the first Saturday in November. Although the date is a year away, interested vendors can contact Roiter at 810-720-0708. 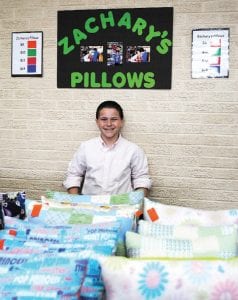 Zachary Papanastasopoulos, 10, of Dearborn showcased his handmande pillows at the Randels Elementary Craft Show. Papanastasopoulos had the booth next to his grandma, Yvonne Erdt of Grand Blanc, who said he began making pillows this summer. 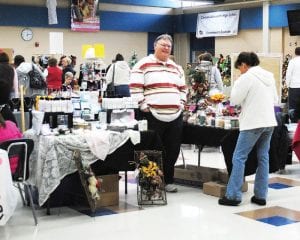 Approximately 800 people attended the craft show, which featured a variety of vendors.