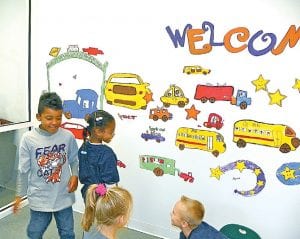 Students from Patricia Morgan’s second grade class at Randels Elementary in Carman- Ainsworth play by the mural they created to be on display at the newly renovated Patsy Lou Williamson car dealership in Flint Township.

FLINT TWP. — A mural created by Randels Elementary school students will be unveiled to the public along with the newly renovated Patsy Lou Williamson Chevrolet dealership at a grand reopening event on October 27.

Patricia Morgan’s entire second-grade class was invited to the dealership a few weeks ago to create the colorful automotive -themed mural on one wall of the new children’s room.

The idea was to get the community involved and to get a children’s perspective, said Suzanne Kayser, director of special projects for the Patsy Lou Williamson Automotive Group on Corunna Road. The children’s room at the dealership contains a kid-sized table and chairs and will include books and other materials to entertain children while their parents are shopping for a vehicle or getting their cars serviced.

Kayser credited Haffajee with shaping her “grand ideas” into a doable children’s project. The result includes the Vehicle City arches, representing local history, and a bright yellow Chevrolet Volt as part of the contemporary images.

“The young people picked up on the Volt right away,” Haffajee said of their introduction to performance vehicles like the Volt and Camaro. “It was the first thing they drew.”

Budding artist Avaree Cooper, 7, drew many of the pictures freehand, making sure to include a drawing of her favorite recreational vehicle.

Haffajee said a projector was used to transfer the freehand images to the wall for the children to trace and color using acrylic waterbased paint.

They worked in shifts of about five people. Some painted while others enjoyed snacks provided by Kayser and some read or drew in activities books also provided for them.

The entire paint job took about two hours thanks to preliminary set-up done by three fifth graders who came in the day before to draft some of the background for the mural. Joseph Ditteber, Sean Jerome and Garrett Gleason were chosen for artistic ability and demonstrated responsibility as role models in the school.

“I knew they would work will with the little kids,’’ Haffajee said.

The art outing also included an educational lesson on safety that is incorporated in the mural in the form of stop signs, stop lights, a crossing guard, a police car and a small child wearing a seat belt.

Buckle up, stop at red lights, obey the crossing guard and walk with a buddy are some of the lessons that stuck with Avaree and fellow artists Madison Bright, Aaron Treiger and Malaki Edwards, all 7.

Haffajee said that Morgan’s class was selected for the project because she knew the interest would be high.

“We love to work with the community,’’ she said.

Kayser said Randels was chosen because it is located near the dealership but she will be looking at other schools for a similar project at the Williamson Buick dealership next door which also is being renovated.