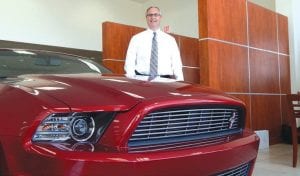 Joe Greene, general manager at Randy Wise Ford in Ortonville, entered the auto dealer business 27 years ago after graduating from Albion College. Through one of his college professors, Greene got a job interview with Randy Wise. Greene got the job and has been part of the Randy Wise Automotive Team ever since.

“My first job for Randy was as an auditor. I learned the financial end of the business first,” Greene said. “That gave me an opportunity to learn the whole business and at some point I’ve worked in every department,” he added.

Greene took over as general manager at the Ortonville store in 2011. In March of 2013 the Wise team opened the doors on a new state-of-the-art 20,000 sq. ft. dealership that replaced the 5,000 sq. ft. building that had been the site of a Ford franchise since the 1950s.

“We have all the amenities for our customers now – plenty of parking, a spacious showroom and customer lounge areas,” says Greene of the new facility. “Our service department has 9 service bays and all new equipment, too. We did not shortcut on anything that was needed to take care of our customers,” Greene adds.

Business has been on a steady incline since the new building made its debut. Greene credits Randy Wise with putting together the team and culture that has been successful in Ortonville as well as the other four Wise Automotive locations. “A healthy environment in the dealership is important,” Greene explains. “When our staff is happy and working as a team, that feeling goes out to the customers.”

Greene himself is a big part of that good feeling. “I love the business,” Greene says, “There is no better feeling than to a meet a customer’s needs.”

Greene and his wife Cathie live in Goodrich where two of their three children attend Goodrich Area Schools. Their eldest daughter is a Goodrich graduate now attending Harding University in Arkansas.

“It’s great to be involved with our local communities,” Greene says. “We love being involved with the schools, community festivals and local fundraisers.”

Greene again refers to Randy Wise when it comes to community involvement and commitment. “Randy taught me that we get involved, not for accolades, but because it is the right thing to do,” Greene said.

One of those ‘right things’ is the dealership’s donation that will fund a new scoreboard at the Goodrich High School Roy U. Stacey Athletic Complex, which will be erected for the coming fall football season.