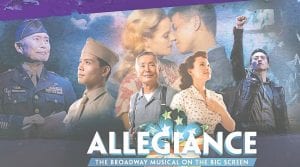 George Takei’s “Allegiance” is a musical play chronicling the life of a Japanese -American family after their relocation and confinement during World War II.

FLINT TWP. —GeorgeTakei is probably best known as Mr. Sulu from the “Star Trek” television series, but another side of this actor is brought to light in a musical play called “Allegiance.”

Inspired by Takei’s real life experience, the play tells the story of a fictional Japanese American family who along with 120,000 other Japanese-Americans were forced into internment camps following the attack on Pearl Harbor in December 1941.

A performance of the play, filmed during its Broadway run in New York from October 2015 to February 2016, was screened nationwide before a limited audience on December 13 of last year.

Rave Cinema, 1591 S Graham Road, is among several hundred theaters nationwide selected to participate in a special encore screening of the film on Sunday, February 19. Also known as The Day of Remembrance, February 19 commemorates the 75th anniversary of Executive Order 9066, signed by President Franklin D. Roosevelt as a national security measure. It authorized the beginning of the forced relocation and internment of Japanese Americans including Takei’s family, during WWII.

Given current events, this is a good time to reflect on that era of American history, said township Trustee Frank Kasle, who announced the movie screening at the township board and also distributed flyers.

Tickets are $17 for children, $18 for students and seniors and $19 for adults, according to the cinema’s ticket site at https:// www.cinemark.com/refer?r=NCM&p=Movie& m=61896&t=1096&d=02/19/17 Kasle noted that admission prices are much cheaper than it would have cost to see the play on Broadway. The screening starts at 12:55 p.m., preceded by an on-screen introduction from Takei, who also stars in the play, and followed by behind-the-scenes footage and interviews with the cast and creators.

“At a time when echoes of the internment ring once again far too loud in our political discourse, there’s never been a better moment for the story of Allegiance to find new audiences,” said Takei, in promotional materials posted online at allegiancemusical.com/article/ allegiance-film-encore/#YZY5k6zmvMR7OZcr. 97

“It is a true testament to the power and the relevance of this story that so many people attended its premiere in December, and it is only appropriate that even more people will be able to witness it on such an important day as February 19, 2017. The Day of Remembrance is a day of commemoration, of reflection, and of learning, and I hope Allegiance can play an important role in its celebration, this year, and for many years to come.”

Allegiance explores the ties that bind us, the struggle to persevere and the overwhelming power of forgiveness and, most especially, love, according to promotional materials.

Other screenings in Michigan include theaters in Lansing, Livonia, Canton, Ypsilanti and Walled Lake.