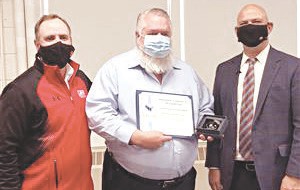 Ray is one of four school board members in the state to receive the honor that “represents the highest level of professional development that a board member can attain,” according to school Superintendent Clarence Garner.

“We all like to tease Mr. Ray because he has a black book and he puts all kinds of notes in that book,” said Garner. “But it’s clear that Mr. Ray is still a student at heart. Based on this award, he will join a select class of former Grand Blanc school board members to earn such a distinction.”

Ray is only the fifth Grand Blanc school board member to achieve the recognition. Others were Lilian Mason in 2001, Russell Kirksey in 2003, Mike Blondell in 2005, and Debbie Hancock in 2012.

“Thank you for all you continue to do not only to serve others but to be a model for others that education doesn’t stop when we become adults,” Garner told Ray.

School board Trustee James Avery also expressed appreciation for Ray’s efforts, saying, “When you talk about the quality of a district, it’s the investment of the school board and you exemplify that. I’m proud to serve with you. You are a great example for us.”

Ray, a systems architect, has served on the Board of Education for 12 years.

“You have to be a continual learner because the environment changes,” Ray said of his dedication to advancing his knowledge as a school board member.

School board members make a lot of decisions, always keeping the best interests of the students in mind. That means they must keep current on the changing educational environment by attending seminars and workshops, and doing a lot of reading.

“The way we did it for the last 100 years, putting the teacher up front and all the kids facing forward, isn’t necessarily the best way to learn,” Ray said as an example of a main topic of discussion among boards of education these days.

“These kids have been playing video games, they make a decision every two to three seconds and get a response every one to two seconds. We wonder why kids are bored sitting in a row in a classroom. So, we have to learn how this generation is learning. It’s where the industry is going.”

Ray said he didn’t set out to achieve the President’s Award, it just happened organically as he continuously sought more and more information in an effort to be the best school board member he can be.

He said receiving the honor feels great, “but it’s time to get back to work.”

“I’m not big on celebration,” Ray said. “I’d rather celebrate our students’ successes than my own. We achieve as a community, as a district. I try to live by that example.”