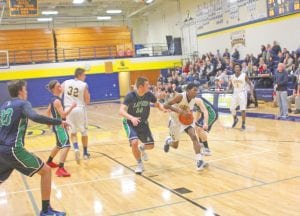 MILFORD – While it’s more prevalent in other states, a growing number of individuals feel the sanctity of prep athletics is slowly fading away like the sands in an hour glass. Between the influence of collegiate programs, agents, corporate entities and various other sources, issues like amateur status and the integrity of the game are taking a back seat to processes such as college recruiting, especially with younger athletes.

That’s why the Michigan High School Athletic Association continues to host its annual Reaching Higher Basketball Showcase that takes place this year at Milford High in Highland Township on July 13 for boys and July 25 for girls. Locally, Goodrich’s Carrington Wiggins will take the court alongside Imlay City senior Griffin Schirmer and Bentley’s Zach Trent. No local girls are listed.

According to a recent press release from the MHSAA, Reaching Higher is, “More than 200 athletes with aspirations to play at the college level will train and scrimmage under the tutelage of high school coaches from across the state and in front of college coaches expected to represent all three NCAA divisions, the NAIA and junior college levels.” It also states that coaches from 39 colleges, including nine from Div. 1, were at last year’s event.

To take part in this clinic, players were nominated by their coach through the Basketball Coaches Association of Michigan in December. Participants then were chosen in February.

BCAM says the event, “is to give athletes a vision of what it takes to become a college basketball player and also succeed in college life.”