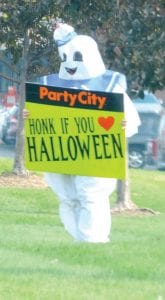 FLINT TWP. — ‘Twas the week before Halloween and all through the retail corridor, stores were busy wooing customers with signs and deals on merchandise.

Party City on Miller Road went live with a costumed character waving at passing cars on the road.

Halloween spending is estimated to reach $7.4 billion this year, including $2.8 billion on Halloween costumes, according to the National Retail Federation, a trade association.

According to its annual Consumer Spending Survey, 75 million adults will dress in costume this year, mostly sticking to traditional options, including a witch (4.8 million), animal (2.6 million), Batman character (2 million), and pirate (1.8 million).

About $1 billion is expected to be spent on children’s costumes. Favorites include characters from Disney’s “Frozen” and Mutant Ninja Turtles.

Findings also revealed 14.3 percent of celebrants will outfit their pets to the tune of about $350 million in spending.

Record numbers are expected to celebrate Halloween this year,

Candy sales were projected to reach $2.2 billion and another $2 billion spent for frightful home decorations include life-size ghosts, pumpkins and festive décor

Signs lined the roadway and a costumed character from the Party City store on Miller Road invited motorists to get into the spirit of the holiday.