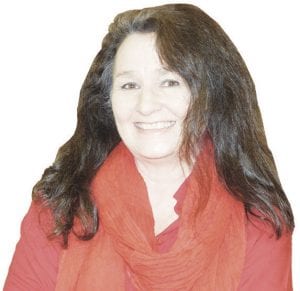 Recently, I needed my grandmother’s oatmeal raisin cookie recipe, the one in her handwriting. But when I checked her Bible, the recipe wasn’t there, or anywhere. I was devastated, because it can’t be replaced.

A couple weeks later, my mother gave me a tin full of grandma’s recipes. The papers were yellowed, and stained with drips of undetermined ingredients. They smelled old. I started sifting through them the other day.

Not surprisingly, since grandma managed a doctor’s office, some recipes were written on prescription slips and notepaper with pharmaceutical logos. Some were jotted on paper from the adding machine that sat between the typewriter and Rolodex on grandma’s desk.

There were recipes torn from soup cans, sugar bags and butter boxes. One was on a deposit slip from the State Savings Bank of Harrison, and one on a small envelope marked “One Percent Inspection Envelope.”

Many were clipped from newspapers like The Grit, and some were even written on recipe cards. A few included names like “Aunt Ida” and “Myrtle.” There was a cabbage roll recipe from Mrs. Irene Kovacs from Lennon.

I found Ann Landers’ “famous meatloaf” recipe, and one prefaced with, “Extra-good pork and beans will make a hit with any bridegroom.” Another advised, “A spectacular and lovely cake is every homemaker’s pride and joy.”

There were some odd concoctions, such as peach cottage cheese pie; a sandwich spread made of raisins, peanut butter, cottage cheese and salad dressing; Devonshire spaghetti with tomatoes, chicken, ham and pasteurized processed cheese spread; and horseradish Jello, which also called for cottage cheese.

A lot of the recipes called for cottage cheese, and/or pineapple, and/or gelatin, which I understand was a fair substitute for sugar when the latter was rationed during the war. Since technology had greatly improved canning processes by the mid-20th century, canned goods were abundant among the lists of ingredients, which also made for some “interesting” recipes. Apparently, mixing tuna and tomato sauce was a thing.

Three of grandma’s recipes called for those ingredients, one also called for cream cheese, pimento, hardboiled eggs … and unflavored gelatin. Tomatoes, themselves, were another popular theme. I found a recipe for tomato marmalade which actually sounds good because it includes oranges, lemons, cinnamon, cloves and tomatoes salted “by guess and by God.”

And, yeah, the cookie recipe was in there, too.

It might seem like just a box of random recipes, but it’s really a story of grandma and, in fact, her era.

My recipes tell a story of someone on the front line of the transition between the housewife and working woman eras. There are a lot of one-dish and slow cooker meals.

My daughter’s recipes tell a story of someone for whom health and wellness are priorities, someone who prefers fresh, organic ingredients like my great-grandmother used.

What stories do your family’s recipes tell?

Lania Rocha is a reporter for the View Newspapers. Contact her at 810-452- 2652 or at lrocha@mihomepaper.com.