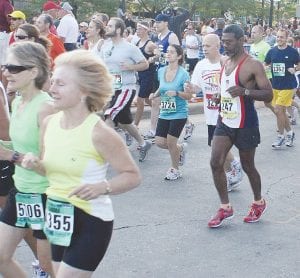 A group of runners got their race started at the packed start line last Saturday.

FLINT
— The Crim Festival of Races continues to grow in numbers and popularity every single year, and 2010 was absolutely no different, as thousands pounded the pavement Saturday morning in downtown Flint.

There were over 10,000 participants at this year’s Crim, making this a record-breaking festival. Events ranged all the way from the ten-mile run to the one-mile walk, with festivities kicking off bright and early at 7 a.m.

“It’s awesome. There’s a bunch of national championships throughout the year, different distances, 5K and marathons,” said Bizenuh. “So, it’s like a road circuit, and I’ve been second and third a few times, but this is my first title. So, it’s pretty nice for my sponsors – New Balance and Powerbar. And it’s great for the bank account, too, so I’ m pretty happy with it It’s just very validating and rewarding to come out here.”

“My parents drove up here from Indianapolis, and to have them here and it’s streamed on-line, too. So all my friends and family watching, it’s really great to come through.”