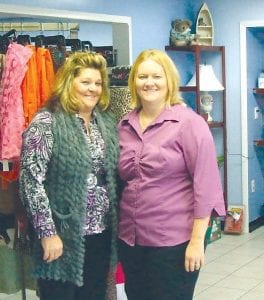 Above, the exterior of Recycled Treasures on Saginaw Street, north of Dort Highway. Brenda Swallow and Laura Nuyen stand inside their newly opened second-hand store.

GRAND BLANC TWP. — Brenda Swallow is passionate about helping others and hopes teaming up with her niece, Laura Nuyen, will be a path toward “giving back” — something she has longed to do since she herself was a young widow with small children years ago.

Back then, she shopped second hand stores often, but found most items were pretty well worn. Those times are behind her now, and she wants to ‘pay it forward’ by giving people in similar circumstances a place to buy things which are still serviceable — at a reasonable price.

The recent resurgence of the style “shabby chic” is responsible as well. Swallow believes retro items often were better built than modern furniture. She said she thinks a purpose in helping to re-use them, but also helping others who may have little or nothing.

“A lot of places (consignment) won’t accept older things,” she said. “There’s a strong market for recycling and re-using things.” 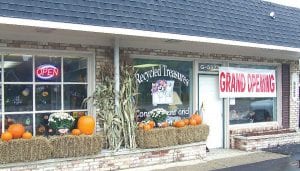 Swallow said the store is very much a venture of the heart, and she has always been very involved in charity and giving back — and she isn’t in business to become a millionaire.

“We want to be a success but it is more about people. We want to bring value to our customers,” said Swallow.

Although she worked in automotive engineering for 28 years, Swallow said she hopes the store will be a great deal more gratifying.

Her goal is to create an ‘old world’ atmosphere where people feel more like neighbors coming to visit than people shopping.

The store carries furniture, artwork, home decor, clothing and jewelry, but won’t be carrying children’s items. Her goals include opening two additional stores by 2015, hopefully in areas which would be closer to people in need.

Recycled Treasures is located about a quarter mile north of Dort Highway on Saginaw Street.