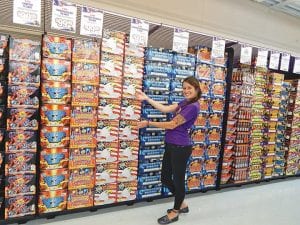 Shelby McNally, an employee at Phantom Fireworks on Miller Road, shows samples of bestselling mortars sold in the store.

FLINT TWP. — Nothing says the Fourth of July like a fireworks display which a change in state law last year lit up even more for consumers choices.

For fireworks fans who don’t want to wait until dark, there is a new category this year called daytime fireworks.

It is a 200 gram repeater that shoots up into the sky in pillars of colored smoke, said Jesse Kish, an assistant manager at Phantom Fireworks, 3392 Miller Road. They don’t go up as high as the best-selling 500 gram repeaters but the effect still is “awesome” for a non-nighttime event, he said.

The bad news is that “Up in Smoke,” the brand name for daytime works, has literally gone up in smoke.

“We sold out about two weeks ago and haven’t been able to get any more in yet,” Kish said last week.

The shortage is due to so many new stores opening this year, he said. Available supply was distributed among all stores and sold like hot cakes. But there are a many other things in the store to choose from. 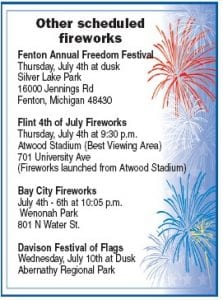 Mortars and the 500-gram repeaters are the biggest sellers, Kish said.

Mortars are a more hands-on reloadable kit with drop-ins that shoot up high and give a big splash of color. The 500-gram repeaters also shoot up high with great color and sound, Kish said. It has a one-wick fuse and shoots up as many shots as there are in the case.

“A lot of people use that as their finale piece so they can sit back and watch,” Kish said.

The Fourth of July is the store’s biggest sales period, followed by Memorial Day, Labor Day, Christmas and New Year’s.

Demand is so high that about 25 extra temporary workers are added to the regular staff from May through July.

Most Phantom customers are folks planning family get-togethers, Kish said. Some take them up north to set off at their cabins. Lakefront dwellers like to shoot them out over the water.

Phantom stresses safety and provides its customers with detonation advice and pamphlets.

“We want our customers to be safe and come back for years and years,” he said.

He also advises customres to check with the local municipality to make sure they are not breaking any laws. Some municipalities – including Flint Township – have enacted ordinances limiting fireworks use to only 30 days each year – the day before, on and after 10 legal holidays.

Phantom Fireworks is open yearround except Christmas Day and part of New Year’s Eve, he said. The store will be open on the Fourth of July from 8 a.m. to midnight.

Non-DIYourselfers who’d rather sit back and enjoy someone else’s show will have to drive a bit this year.

This year the best bet for local viewing is coming up during the Our Lady of Lebanon Mid-East Festivall, July 12-14.

A fireworks show is being planned for 9:40 p.m. on Saturday July 13, vieweable from the grounds of the church at 4133 Calkins Road.