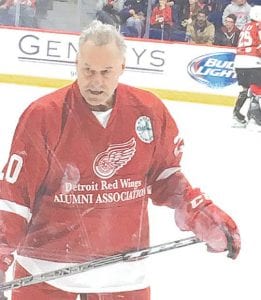 NHL Hall of Famer and two-time 50-goal scorer Mickey Redmond is scheduled to play in the Alumni Game on Friday.

FLINT – For the fourth year in a row, the Dort Federal Event Center will host a Detroit Red Wings- Flint Generals alumni game Friday. The game will faceoff at 7 p.m. and all of the proceeds from the contest will be donated to the Kris Perani Hockey Foundation.

“For the fourth consecutive year, it will be great to see the guys back on the ice and in the crowd, playing the Red Wings alumni team, one of the greatest franchises in the National Hockey League (NHL),” said longtime Generals defenseman Lorne Knauft in a press release. “Hockey fans and sports fans, Firebirds fans, Generals fans and Red Wings fans alike, won’t want to miss it.”

There will definitely be some big names on the ice, such as former Stanley Cup champions Darren McCarty and Joe Kocur on the Red Wings’ squad. Former Red Wing and current color commentator

As for the Generals’ squad, longtime captain Jim Duhart will be back on the ice, as well as defenseman Stepahne Brochu. Several of the players were also members of former Colonial Cup championship teams, including Jason Payne, Keith Whitmore, Jason Glover and John Heasty.

Tickets can either be purchased on ticketmaster.com or at the Dort Federal Event Center box office and they start as low as $12. If you come with a group of 10 or more, you’ll be eligible for $2 discounts. If you’d like to rent a suite, contact Karla Turner at karla@flintfirebirds.com.

See next week’s edition for the full recap.