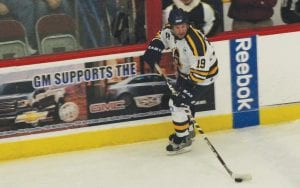 Flint Generals’ alum Jim Duhart skates the puck into the offensive zone during the last Generals alumni game in 2014.

FLINT — Area hockey fans may be aware of the Flint Generals alumni games of the past. They even had one last November for several good charitable causes. There hasn’t been an alumni game quite like the one that will take place on Friday, Feb. 20, though, as the Generals alumni will lace up the skates to face off with alumni of the Detroit Red Wings.

The game will face off at 7:30 p.m. at Perani Arena in Flint. The contest will feature many minor league and National Hockey League names of the past, headlined by former Red Wing Joey Kocur, who left Detroit after the 1990- 91 season, but returned in time to win two Stanley Cups in 1997 and 1998.

“With all the hockey history in Flint – with the Generals and Spirits – it will be great to see the guys back on the ice, and in the crowd, playing one of the greatest NHL franchises alumni – the Detroit Red Wings,” former Flint Generals defenseman Lorne Knauft said in a press release. “Hockey fans in general, both Generals fans and Red Wings fans alike, won’t want to miss it.”

Knauft will be suiting up for the Generals, along with Flint legends like Jim Duhart, Stephan Brochu, Larry Bernard, Ken Whitmore, Jason Glover, Dale Greenwood, John Heasty and Ross Wilson. Several of those mentioned helped guide Flint to Colonial Cup championships during the 1996 and 2000 seasons.

Despite some of the bigger names on the roster, tickets cost from $10-15 and can be obtained at the Perani Arena box office, Ticketmaster outlets or at www.ticketmaster.com.

A certain amount of proceeds from the game will be donated to the United Way of Genesee County, which helps individuals and families reach their potential when it comes to health, education and financial stability.

Proceeds will also go to the Old Newsboys of Flint, which is a charitable organization that has granted over 700,000 Christmas wishes to area kids for close to a century. Also, a post game charity dinner is open to the public following the night’s events at Bubba O’Malley’s in Burton. The cost to attend the dinner is $30.

The game might be even bigger to Flint-area hockey fans than meets the eye. With the approval of an Ontario Hockey League franchise in Flint next season, the game only helps build excitement toward the fall. Especially since rumors are floating that the new team name, logo and colors may be unveiled at some point during the alumni game.