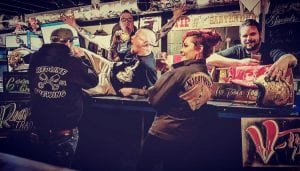 From left to right, Andrew Nichols, Tub Welch in back, Dave “Hillbilly” Johnson on the bar, Michelle “Eve Elle” Welch, Doug Grover on the right.

BURTON – Tub Welch is organizing an art show May 20 that he says will be “one of the most diverse and oddball panels of artistic talent in the area.

“When people show up on May 20, I expect them to see a real grassroots hot rod/motorcycle and Lowbrow art show with budget-built hot rods, bobbers and choppers reminiscent of the eras that spawned the culture,” said Welch. “I expect to see people maybe even mildly puzzled. It always happens. Some people won’t ‘get it.’ I mean, we’re promoting an art show. Most people will think of nicely painted canvass compositions with impressionistic visuals, maybe a nice quiet setting with well-dressed people conversing over some Cabernet about what a particular piece says to them.

“We’re essentially dragging all crazies out of the looney bin, putting them in a pub with their off-the-wall art and turning them loose. This culture of artists that are coming together for this represent the misfits and against-the-grain passion that defies the norm.”

Welch said the show had no choice but to be at Redline Brewing Company and the owner, Doug Grover was a major reason for the locale.

Doug has gone against the grain to be where he’s at, following his guts and passion,” Welch said. “He quit being a teacher and sunk everything he had into his business just to watch it go up in smoke when his first location burned not two weeks after opening. He stared defeat in the face and rebuilt. Not only that, but his motorcycle roots run deeper than most. He’s got over 300,000 miles on a Harley that he wrenches on and drag races to blistering sub-11 second passes. So it shouldn’t surprise anyone to have a show like this in a pub that’s decorated like your neighbor’s garage – a really, really nice garage with 20-some handcrafted beers on tap.” With help from Johnson, Doug and Kally Grover and his wife Michelle, Welch is taking the lead on putting the show together, saying, “My wife and I have put together some fairly big shows and this may be the cake topper as of yet.”

There will also be live music by Rabbit Ain’t Lucky, a punk band that is a made up of a dad and his sons.

“This show is going to be big,” said Welch. “I believe it could really be something the community could embrace and cultivate into a really cool annual event.”