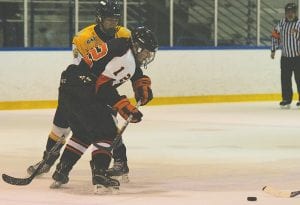 Flushing’s Josh Williams battles for a loose puck in a game earlier this season.

BAY CITY — With the final regular season high school hockey games played this past weekend and into the early part of this week, preregional action kicks off Monday, with the regional rounds on March 1. Finals are March 3.

“The game between the two Bay City teams is a rivalry so you never know what will happen,” said Flushing coach Jon Jepson. “Our last couple of games, our work ethic has been tremendous and we’ve tightened up our D-zone. We are where I had hoped we would be at this point in the season. We are just worried about how we play regardless of the opponent and will be coming out strong to compete.”

On the other side of the brackets, Clarkston, 13-6-2, and Grand Blanc, 1-9-1, 0-4 Kensington Lakes Activities Association, go head to head on Monday, February 28, with Clarkston likely to face Flint Kearsley/Holly on March 3. Grand Blanc has been plugging away with a very young team that has skated with a lot of heart and ability this season. The team’s scores and record doesn’t accurately show the potential, but the Wolves of Clarkston are the likely winner of this pre-regional with Kearsley at 6-2-0 Flint Metro League. Clarkston sits in second place in the Oakland Activities Association.

Flushing defeated Clio-LakeVille last Saturday, 3-1, at Ice Mountain, after trailing, 1-0, after the first period. The Raiders evened things up in the second, though, and took the win after a 2-0 third-period.

The Flushing vs. Davison game from Monday has been rescheduled to today at 5 p.m. at Perani Arena.