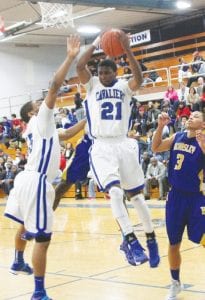 MT. PLEASANT — Justice Green scored 22 points for the Carman- Ainsworth varsity boys’ basketball team on March 13 in the finals of regional No. 8-1, but it wasn’t enough to keep his squad from falling to host Mt. Pleasant, 64-61.

Cameron Morse also came through for the Cavs to the tune of 19 points, Ja’Quin Jones had 11 points and scoring four and two, respectively, were Brandon Walker and Demarion Allen.

“(Green and Morse) performed as expected. They were our guys all season long and they performed like the big time players they are,” said Carman- Ainsworth coach Jay Witham. “We started out in a 3-2 zone to double Jaleel Hogan and Mt. Pleasant was able to get good ball movement and find the open person and they were able to knock those shots down.”

Mt. Pleasant actually took a 15-10 lead at the end of the first before getting outscored by Carman-Ainsworth, 24-12 in the second, to make it a 34-27 game at the break. The Cavs then widened that gap to 52-40 by grabbing a, 18-13 scoring advantage in the third before Mt. Pleasant came back in the fourth with a 24-9 run to claim the victory.

“We changed defenses to man and pressured them full court. We were able to get some turnovers and got out and ran for some easy baskets. Offensively, we did not settle for jump shots and got to the basket,” Witham said. “In the fourth they pressured us full court and we did not handle the pressure for some reason. We also started settling for jump shots, quick shots, plus the wrong people were taking them. (Mt. Pleasant) also went 10-12 from the free-throw line.”

One difference for Mt. Pleasant was the late-game heroics from the charity stripe of Kaleb Perry and Aaron Leasher. Anton Cotton and Hogan also proved key for the Oilers, who beat Traverse City West, 74-53, in the regional semifinals on March 10 in Cadillac. Mt. Pleasant took the court on Tuesday in regional quarterfinal No. 4-1 against Howell in Davison and the semifinals begin March 21 at the Breslin Center on the campus of Michigan State University.

In the regional semifinal in Owosso on March 10, the Cavs defeated Saginaw, 80-51, after Carman-Ainsworth won the No. 9-1 district title. The Cavaliers ended the season with a record of 21-4 overall.