Regionals on the horizon for Flushing hockey 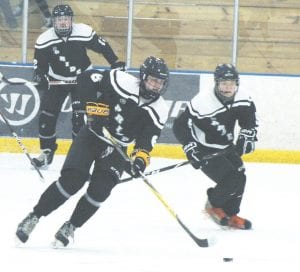 Flushing’s Kurtis Clary (6) and Landon Duckworth (5) work the puck against the Lapeer co-op in January. Photo by Brandon Pope

MIDLAND — The Flushing co-op hockey team (Flushing, Swartz Creek, Goodrich) finished out its final regular-season game after we went to press Wednesday facing Saginaw Swan Valley. Last Friday, the Pride lost to Ubly 6-2 and last Wednesday, the team was shut out against Freeland 8-0.

The focus now turns to next week’s regional tournament. Flushing coach Ben Guzak had noted two weeks ago that the team is playing a lot looser and having more fun in the process, despite what the scoreboard shows. The boys are also now taking advantage of and capitalizing on scoring opportunities.

“Regionals are coming up soon and we are excited to play,” said Guzak, “Our team continues to work hard and improve. Our last few games the players have really been playing well and competing hard. Our captains, Colton Giacumbo, Mason Rich and Noah Somers have stepped up and shown solid leadership and have been playing very well. In addition, our senior goalie Gavin Powers has been tough between the pipes.”

The regional tournament kicks off 5:15 p.m. on Feb. 26 with Saginaw Heritage, ranked No.2 as of the Jan. 30 Michigan High School Hockey Coaches Association rankings and No. 7 in the Super 10 rankings, facing Essexville-Garber at Midland. Lapeer (Lapeer, Almont, LakeVille, North Branch) gets the winner Feb. 28 at 6 p.m. Bay City Western (Bay Area Thunder) faces Midland Feb. 26 with Flushing playing the winner Feb. 28 at 8 p.m. The title gets decided March 4 at 7:15 p.m.