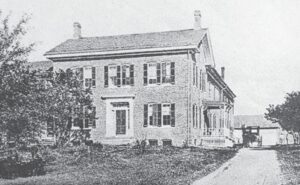 In some countries they had places known as work houses up until the 20th century but starting in ancient times it was used as a way to get free labor out of people who were in a bad way and had no home.

These people were not treated well and were outcasts for society. They would be put into a workhouse if they could not pay their way in life and were committed to work hard labor for their food and bed.

In the United Kingdom it started about the 17th century to clean up the streets of orphans, vagrants and the poor. They were shamed and sent to farms to work. Annie Sullivan, 10, and her brother, were placed in a poor house in Tewksbury, MA, and the conditions were terrible.

By the 1883 they were investigated, and she got out and graduated from Radcliff College in 1904, then went on to teach Helen Keller, if you remember that story.

There was no welfare system or Social Security set up yet, so if you think about it, the Poor House was a way to keep the streets clean of homeless people. So, America adopted the idea from Europe in the 1660 in Boston, the people considered themselves safe from the “bad elements” and then they thought to themselves; this would be a good way to find free labor.

So, they paid them a minimum wage and they weren’t called slaves, though they were not allowed out in society and remained uneducated.

After the Great Depression things started to change and by the 1940s with urban housing, the Federal Housing Administration and other programs, by 1968, people were able to get training and better jobs. So, the government took it upon themselves to control these people with the welfare system, keeping those people in a low-income bracket.

Our history goes back to the 1850s when we were settling Genesee County and the photo featured with this article shows the Genesee County poorhouse in 1894.

Some people did not make it through the cold harsh winters here in Michigan and because of their loss of family members they were put in houses to take care of their basic needs.

In Genesee County, we had a place for the people unable to work called a Poor House on Hemphill Road, off Saginaw Street in Burton.

This was home for many, and history shows this was a working farm to provide the food they needed. This was a way to take care of the disabled, widows and orphaned children.

There was usually a cemetery or Potters field by the facility like the one on Hemphill Road in Burton. There was even a Potter’s field in the 1700s where Madison Square Garden is in New York City today.