Renaissance Festival is in full swing 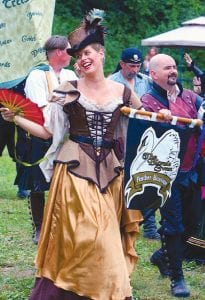 A maiden marches across the grounds of the Michigan Renaissance Festival in Holly. The Festival has been operating for 33 years. It opened August 18 and will run every weekend until September 30.

HOLLY — The 2012 Michigan Renaissance Festival is in full swing, marking its 33rd year, and 32nd operating in Holly. This past weekend, Dave Harris, High Lord Mayor of the Festival for the past 31 years, said the festival started after a group of people showed interest in having a festival that represents the medieval times, which is notoriously called Ren Fest.

“It is a totally unique entertainment experience. You are immersed in the time period and what happened back then,” commented Harris.

There are seven stages with themes on over 25 staging areas. People will see a show every 45 minutes across a stretch of 17 acres of land.

Each weekend, a new theme is introduced to patrons. Last weekend, which was the first day of the Ren Fest, kicked off with the Royal Pet and Ale Festival. This is the sixth year pets were integrated into the festivities with rescue groups, veterinarians, dog agility groups and pet supply stores. Microbrew was also on hand for taste testing.

The following weekend themes listed on the Ren Fest website are as follows:

US Canadian Highland Heavy Games with games in both professional and amateur categories held twice daily in the Valley of Aberdare along with a Junior Caber Toss in the Children’s Realm.

Men in Kilts Competition, where patrons have a chance to show off a tartan in this “silly” Scottish competition.

Scotch Egg Eating Contest where patrons can test their “mettle” in this eating contest.

Pillage Village for vendors and Knights on Bikes where cyclists can present their motorcycle license at the Festival Box Office and receive $5 off admission.

A tattoo competition where prizes will be awarded in several categories including Best Color, Best Black & Grey, Best Piratical, and more categories.

Press-A-Wench, where patrons can watch as fair maidens are pressed skyward in this Renaissance Festival tradition and Perfect Pirate where patrons win first-, second- and third-place prizes for the best saunter and swagger in Hollygrove.

•Wonders of the World September 8-9.

This is Deaf Awareness Weekend along with the sixth Annual Traditional Middle Eastern Dance Competition.

There will be Wine Tasting In the Valley of Aberdare from 10 a.m. – 7 p.m. Saturday, Noon – 7 p.m. Sunday along with the World Market event and a Grape Stomp.

An annual patron favorite, contestants are “hand picked” to try and stomp as much juice as they can for a prize.

This is the only Friday the Festival is open. This is a great opportunity for school groups to expose their students to a unique and fun educational experience! Interested educators as a potential field trip destination should call 248-634-5552.

Games in both Professional & Amateur categories held twice daily in the Valley of Aberdare along with a Junior Caber Toss in the Children’s Realm.

Celtic Village and BBQ Competition will be held all day in the Valley of Aberdare. Free samples of mouthwatering BBQ ribs, sausage & more from local Michigan pit masters.

BBQ Vendors and Wine Tasting will be held in the Valley of Aberdare, 10 a.m. – 7 p.m. Saturday, Noon – 7 p.m. Sunday. There will be an arm wrestling competiting held in the Valley of Aberdare where competitors will test your strength in this stand up, double elimination competition. Prizes will be awarded in junior and adult, women’s and men’s divisions.

Sixth Annual Michigan State Royal Archery Tournament is scheduled. Archers are invited to test their skills and compete for the honor of becoming one of the Champion Archers of Hollygrove.

Brewing Braw in the Valley of Aberdare and watch the awards ceremony for Best Ales and Lagers, Best Ciders and Meads and Best of the Festival.

12th Annual Chocolate Festival all day in the Valley of Aberdare. Local chocolatiers and bakeries will be on hand to distribute samples.