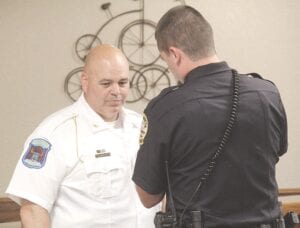 Rendon’s son, an officer with the City of Davison Police Department, pins the chief’s badge on Jay Rendon at his June 30 swearing-in ceremony. Photo by Gary Gould

DAVISON TWP. — When Jay Rendon became a police officer almost 30 years ago, he never imagined he’d one day be sitting in the police chief’s chair.

At the time, he recalls, he just wanted to be a police officer and to do “the job.” Last week Rendon was sworn in as Davison Township Police Chief following the retirement of Chief Rick Freeman.

After 26 years with the Davison Township Police Department, Rendon said he’s ready to take on a leadership role.

Rendon calls his career with Davison Township, plus two years before that with the Saginaw County Sheriff’s Department, “pretty satisfying.” 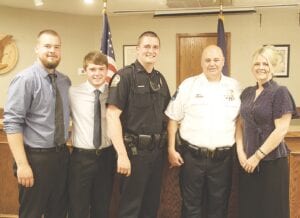 As chief, Rendon said the are some changes he’s like to make within the department, one being the addition of a bicycle patrol.

“With the amount of trails the township has, citizens would like to see police officers on bicycles,” he said. “We can put a bike rack on a patrol car…making it super accessible. I think it would be a win-win situation for everyone and I think the public will enjoy it.”

It’s also super inexpensive, he said, adding the department already has someone who is certified as a bicycle patrol officer.

Another thing Rendon said he’d like to do is improve the relationship between the police and the community.

This past year he said he thinks police have been under attack by the media and by people who don’t believe in trusting the police.

While he said the Davison community has always been very supportive of its police, especially during the past year following protests against police and the COVID-19 pandemic, it would still be beneficial to his officers and the community to do more to bridge the gap between the two.

He said he plans to start Coffee with a Cop and Cops and Cones, both ways for the police and public to meet and interact over coffee or ice cream. He said he’d also like Davison Township to take part in the National Night Out, an annual community-building campaign that promotes police-community partnerships and neighborhood camaraderie, which will be held Aug. 3. There is a similar program coming this fall called Faith and Blue, which builds partnerships between the police, citizen and the faith community.

Rendon, 50, is married to wife Michelle and the couple have three children, sons Derrek, Adam and Jacob.

He thanked the Davison Township Board of Trustees for offering him the job as chief and said he looks forward to working with the township leadership.

“We’ve got a fantastic board that supports the police,” said Rendon. “They have the best interests of the community and the fact that we work together closely – we’re going to do some good things.”