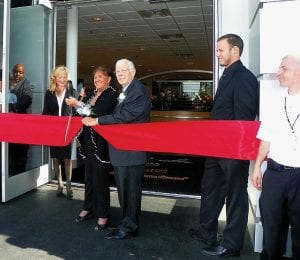 Patsy Lou Williamson and husband Don cut the ribbon at a Grand Re-opening celebration last week of her Buick/GMC dealership on Corunna Road.

The project started in June 2011 with renovations of the adjacent Chevrolet dealership which was completed in October.

“This is an initiative by GM called EBE — Essential Brand Elements,” said Larry White, executive vice president of the Patsy Lou Williamson Automotive Group. “The idea behind this was to get all the stores, whether you’re in Michigan, Florida or for that matter Alaska, to look exactly the same wherever you go.”

Work began on the Buick/GMC dealership last fall immediately after work was completed on the Chevy dealership. Both buildings have undergone extensive interior and exterior upgrades that include new color schemes, furnishings, decorative materials and layout. 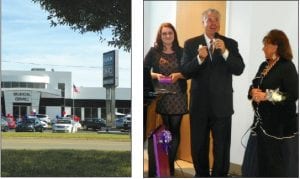 “It was not an easy task for us to accomplish this,” White said of organization required to remain open during renovations. “When you think about taking two stores of this magnitude and in less than a calendar year renovating to what you see today … a state of the art facilities.”

The invitation-only Grand Reopening event at the Buick/GMC dealership included a ribbon-cutting ceremony, hors’ d’oeuvres, drinks, a pianist, and display of the 2012 Buick/GMC vehicle lineup.

Pasty Lou Williamson did ribboncutting honors. In brief remarks afterward, she thanked everyone for coming and praised her staff as “the greatest in the world.”

White stressed again that Patsy Lou Williamson is an major supporter of American made products and local union labor.

“That is why we call ourselves the All-American corner, where we are proud to sell only American brands,’’ he said.