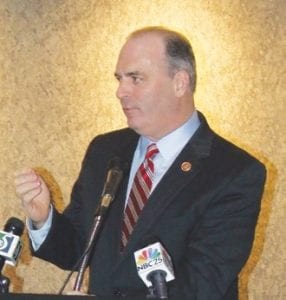 GENESEE COUNTY – Congressman Dan Kildee (MI-05) has filed nominating petitions to be placed on the ballot for re-election as the U.S. Representative for Michigan’s Fifth Congressional District.

According to a press release, his nominating petitions, signed by individuals from each county of the Fifth District, were filed at the Secretary of State’s office.

“It is a privilege and honor every day to represent mid-Michigan in Congress,” Congressman Kildee said in a statement.

“In my first term, I have led the fight to support and strengthen cities like Flint, Saginaw and Bay City by securing millions in federal resources to fight blight and abandonment. I’ve also worked in a bipartisan fashion to pass legislation like the Farm Bill that’s crucial to supporting our region’s economy.”

“There is still a lot of work to be done. Congress must prioritize policies to reinvigorate our manufacturing base and create good-paying jobs. We must also reinvest in our workers so as a nation, we are able to compete in a global economy. I am asking mid-Michigan residents to re-elect me so I can continue serving as their voice and fight for these important issues in Congress.”