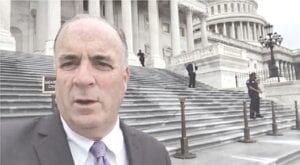 WASHINGTON D.C. — When the COVID-19 pandemic swept through in the spring, many local students missed out on cross-country school outings—including scheduled field trips to Washington D.C.

Earlier this month, Kildee filmed a short video inside the U.S. Capitol and showed off some of the building’s most exciting historical features, including priceless paintings and statues of key American figures inside the sprawling Capitol Rotunda. He then filmed sections of the Senate and House chambers, gave students an outside view from the U.S. Capitol steps and finished the tour with an inside look at his office in the Cannon House Office Building next to the Capitol.

Kildee said that the virtual tour came about after elementary students from Holly Academy in Holly had to cancel their trip to Washington D.C., following the implementation of COVID-19 restrictions.

“The school reached out to me and asked if I could take some videos around the Capitol,” he said. “I felt bad for the students who were looking forward to taking the trip, so I decided to do a walk through for them.”

Kildee said that he enjoys giving in-person tours to school groups from his district when they come to Washington D.C. When he’s available, Kildee will meet with students on the steps of the Capitol and answer any questions they might have about Congress or the building itself.

“There’s a certain sense of patriotism that you get when walking through the Capitol,” he said. “It’s a much more effective way to learn about American history and what it means.”

One of Kildee’s favorite spots in D.C. is the Library of Congress, which he described as the city’s most overlooked landmark despite its vast archives of artifacts and documents.

Kildee said he is also fond of the Congressional Art Tunnel, which is situated between the Cannon Building and the Capitol. The tunnel features artwork created by a high school student from every congressional district in the country, including Kildee’s Fifth Congressional District.

Although physical tours to the U.S. Capitol weren’t possible for many students this year, Kildee hopes that the virtual tour will still give them a glimpse of the country’s rich heritage.