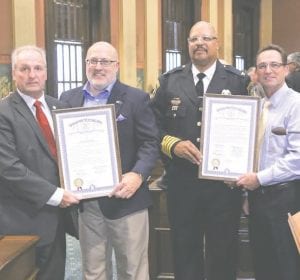 LANSING — State Rep. Phil Phelps (D-Flushing) honored the staff of the Bishop International Airport’s Department of Public Safety on September 14, by presenting them with a special tribute on the House floor, according to a press release.

Phelps presented the tribute to Chief of Public Safety Christopher Miller and Bishop Airport police officer Lt. Jeff Neville, who was stabbed in what the FBI is considering a terrorist attack at the Bishop International Airport on June 21.

“What took place at the airport this summer was a terrifying reminder of the bravery that our public safety officials display every day to keep us safe,” Phelps said. “Not only did these men quickly apprehend the perpetrator, but they did so without any loss of life, and I could not be more proud to be presenting them with this tribute in recognition of their superb service.”

Chaos broke out at Bishop International Airport when an attacker stabbed Neville this past June. Upon witnessing the attack, Airport Maintainer Richard Krul rushed to the aid of Neville to help restrain the suspect until help arrived, and Lt. Dan Owens and Miller intervened to disarm and subdue the assailant. The courage and rapid responses of these officers prevented any loss of life that day.

“Law enforcement and police officers face greater danger and are entrusted with greater responsibility than most, yet they still come to work every day ready to put their lives on the line again for the safety of their community,” Phelps said. “This honor could not be more deserved, and I thank the public safety officials at Bishop International Airport for their continued dedication and service.”