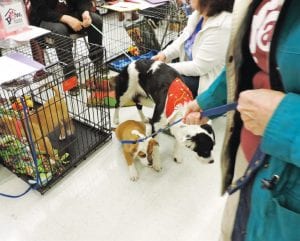 Bree, a rescued dog, was briefly reunited with her puppies last Saturday during a Santa Dog Day adoption event at Petco Superstore, hosted by the PAWS animal shelter.

FLINT TWP. — On Rocky, on Ruger, on Tullula and Jacob, on Petey, Panda and Chessie,

No, those are not Santa’s new reindeer. They are the names given to seven homeless puppies looking for new homes by Christmas, after being rescued from an abandoned garage last month.

The puppies are living in foster homes but were briefly reunited Saturday with their mother Bree during a Santa Dog Day adoption event at the Petco Superstore, 3559 Miller Road.

Four of the seven puppies – four boys and two girls — have been adopted, pending finalization of applications, said Edith Campbell, a volunteer for Pets in Peril (PIP), the rescue arm of the PAWS animal shelter in Clayton Township, who hosted the adoption event which also included cats looking for new homes.

Campbell was one of the PIP volunteers who found Bree, a homeless Border Collie mix, and her babies living in the abandoned garage. Rescuers had to pry up rotted floorboards to reach the puppies, according to an article published in The View last month. 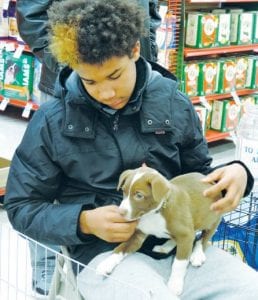 It is a clear case of puppy love with this little guy, one of seven puppies from the same litter, offered for adoption by PAWS.

All are now ready for adoption, Campbell said.

A family also wants Bree but will have to wait a few months until she’s healthy enough. She’s on the mend but when found was underweight, anemic, infested with parasites and suffering from heartworm, Campbell said.