Resident raises alarm over near accident at bike crossing 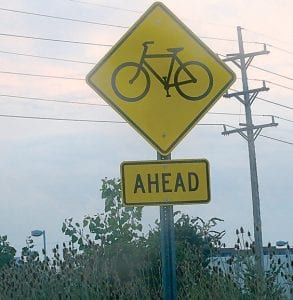 Some speeding motorists are ignoring clearly posted signs warning of a bicycle crossing on Dutcher Road.

FLINT TWP. — After seeing a child on a bicycle almost get hit by a speeding car, one resident has asked the township for better safety precautions where the Genesee Valley recreational trail crosses Dutcher Road.

Speaking during public comment, Jim McClung, who is also chairman of the township parks and recreation advisory board and a avid trail promoter, said he recently witnessed a near accident at the trail crossing when a speeding car almost hit the child.

“This car was flying down Dutcher,’’ he said. The child was riding ahead of his mother who was too far back to be aware of the near-accident.

“I wonder if we could do some extra patrol up there?,” McClung asked, voicing his frustration.

A frequent user of the trail himself, McClung said it sounds like cars actually accelerate as they come around the curve on Dutcher in the southbound lane heading toward the crossing.

The posted speed limit is 35 mph but many cars are going much faster.

Police Chief George Sippert said he was well aware of speeding problems on that stretch of road which many motorists use as a back entrance to the Genesee Valley Center shopping mall.

“Officers write a lot of tickets down that stretch of Dutcher so much so that the Supervisor has received criticism of them saying they were targeting that area as a speed trap,’’ Sippert said.

Township Supervisor Karyn Miller said there have been discussions about a better warning system. A yellow curbside caution sign depicting a bicycle is already posted there to warn motorists of the trail crossing.

Installing a flashing light would be costly, Miller said, but agreed that something is needed to alert motorists to slow down when driving through the area.

She also said she has received complaints from residents on Hoover Road near the trail about people operating motorized vehicles on the trail, which is prohibited.

The 2.6-mile-long, milliondollar biking and walking trail opened in October 2011 and is officially open for use each year from April 1 through Nov. 1 from sunrise to sunset.

The trailhead is at the bus stop on Linden Road in front of Genesee Valley mall and runs northeast, mainly following the course of a former railroad track to the Atlas Coney Island on Corunna Road. It also crosses Lennon Road between Dutcher and Linden Road and runs parallel to high-traffic Corunna Road in its ending stretch.

Efforts also are under discussion to extend the trail across high-traffic Linden Road to connect to trails in the Flint Township Park off Norko Drive.