Residents bring road conditions to board 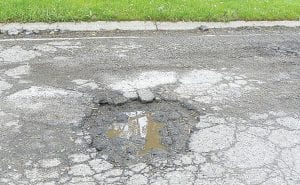 Hefty potholes like this one make the right side of the road rough to navigate on Foxboro entering the Hunters Ridge neighborhood,

FLINT TWP. — A resident of the Hunters Ridge subdivision, spoke during public comments at the May 16 township board meeting, asking that something to be done about street conditions and traffic problems.

Bobby Leflore, a 23-year resident of said the township, said he represented 200 residents in the subdivision off West Court Street, who asked him to bring these issues to the attention of the board.

“We’ve got a problem where our streets are in terrible shape,’’ he told the board.

He said he realized all the streets in the subdivision could not be repaved but asked for something to be done about those three main ones.

Leflore also asked for increased police patrols at the corner of Ryan and Court streets where he said drivers routinely run stop signs.

Township Supervisor Karyn Miller said the president of the Hunters Ridge neighborhood association had come in the previous week to talk to township officials about residents’ concerns. She said remedies for Foxboro and Ridgecliffe would be discussed at an upcoming board meeting.

She also noted that streets in the entire subdivision could be repaved by special assessment, if residents wanted to pay for it.

As for more road patrols, she said Police Chief George Sippert had been made aware of requests. There have been informal discussions about installing a light at that corner and also building a roundabout, she said.

Trustee George Menoutes spoke in favor of a traffic light.

“I go that way and I’m almost running into people,’’ he said of the busy intersection.