Residents call for a return to Christmas decorations on Saginaw Street 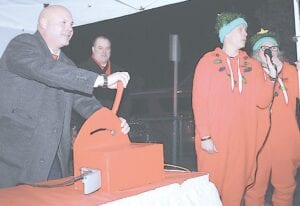 Burton Mayor Duane Haskins throws the switch lighting last year’s Christmas tree and decorations at Fire Station No. 1. This year there won’t be a tree, or a lighting ceremony – but expect to see lots of lights and decorations. File photo

BURTON — Despite a call by many residents to bring back city Christmas decorations along Saginaw Street, aging fixtures and unsafe electrical connections are making that return difficult, said officials.

The Burton City Council discussed bringing back the city decorations, typically hung from light poles along the Burton stretch of Saginaw Street, at its Nov. 16 meeting. But officials say that might not be possible without a major financial investment.

Mayor Duane Haskins said there are issues with burned out light fixtures and estimates to repair or replace the decorations – some 15-20 years old now – are quite costly to the tune of about $20,000.

City Council President Steve Heffner said residents have complained to him about the decorations not being put up since last year.

He said people want to see the lights and decorations up and down Saginaw Street and many have called upon the city to return to the practice of hanging them from the telephone and electrical poles along what is considered Burton’s “downtown” – Saginaw Street.

“It’s been a tradition for years and years and a lot of people look forward to it,” said Heffner. “Maybe there’s still something we can do this year?”

Haskins said there was one deciding factor involved in the matter – cost.

Heffner said because the parks and recreation department had its entire year cancelled, including events like the Memorial Day run, the Trick or Treat Trail and the Easter Egg Hunt, there was unused money in their budget.

“There’s money in their events, so maybe parks and rec can take over the decorating of Saginaw Street, if that was something they wanted to undertake,” said Heffner.

Haskins said Department of Public Works employees would have to hang the decorations on the poles and he said time was also an element with the holidays already upon us.

Council Vice President Greg Fenner said the issue is not just with the decorations, its where they’re been plugged in on the poles.

He said the electrical fixtures are 15-20 years old. They’ve been up for a number of years and are unsafe for workers to get up and plug them in.

“The DDA did get estimates on replacing a number of those and the cost was…astronomical,” said Fenner. “Even if we wanted to purchase newer fixtures, you can’t hang anything on a Consumers Energy pole without permission.”

He said the DDA doesn’t have the money in its budget to fix the outlets, nor the money for new decorations.

As an alternative to decorations and lights along Saginaw Street, Councilwoman Tina Conley said the city has two festive opportunities for the residents to enjoy this Christmas.

The first is the city’s home decorating contest, which is currently underway. To enter, homeowners must fill out a form and submit it to the city.

The grand prize is the Clark W. Griswold trophy – named for Chevy Chase’s character in the classic movie Christmas Vacation. Applications are available on the City of Burton’s Facebook page.

Conley said the other venue for Christmas lights will be the decorations at Burton Fire Station No. 1, 2033 E. Bristol Rd. Located just off Saginaw Street, the fire station and the park next door will be decorated with lights for the holiday season.

She said she and other volunteers including Greg and Stephanie Fenner, Jim Craig, Jeremy Scharrer and Kris Johns were at the fire hall the weekend of Nov. 14 and began putting up lights.

While there won’t be a Christmas tree there this year, and no tree lighting ceremony like they held last year, she said families will be able to drive by and even stop and walk through the decorated playground.

“We’re trying to do everything we can because of the COVID,” said Conley. “I hope everyone will enjoy it. There’s no tree this year, but a lot of lights in there.”

Conley urged the council to consider finding the funds, possibly from the parks and recreation budget, to repair the fence around Fire Station No. 1 and the playground because it has fallen into a state of disrepair.

Councilmen Dennis O’Keefe, Danny Wells. Tom Martinbianco and Fenner said they would support such an effort to fix up the park’s fence if Conley, known for her efforts to beautify Burton, were to spearhead it.

Haskins urged the council to come back quickly with its recommendations for decorations along Saginaw Street so there would be time to order them and install before Christmas.