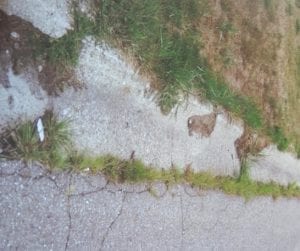 A resident, who took these photos in his subdivision, wants to know who is responsible for getting rid of unsightly weeds growing in the street.

FLINT TWP. — Don Brinkman has lived on Norris Drive in the Lindenwood Farms subdivision since 1982. In all those years, he said he has never seen weed growth in curbs like he’s seeing this year.

He brought photos to the township board meeting to show and tell how the weed growth is noticeably bad on streets in his subdivision.

Brinkman asked the board who is responsible for maintaining the weeds growing in the curbs and gutters in the public right of way. He said many of his neighbors are asking the same question and waiting for the township or Genesee County Road Commission to address the problem.

“I take care of mine,’’ he said but added that some neighbors are senior citizens who has seen trip and fall over the offending tufts.

“All these years, this has never happened before,’’ he said. “A little government support would help us out. I would like to know to know who to see to get the job done.”

Township Supervisor Karyn Miller told him she’d talk with him about the situation after the meeting. James Leverette, a resident of Scenicvue Drive in a different subdivision, agreed with Brinkman. He also commented that the township’s ten-inch height allowance for noxious weeds should be lowered.

“I have seen some two to three inches that looked like a nuisance to me,” he said, adding that he has talked to his neighbors about lawn care and not leaving grass clippings in the street that could end up clogging catch basins.

He suggested starting an awareness campaign. Vacant properties are another concern, he said. Something needs to be done to impress buyers coming to look at vacant properties, he said.