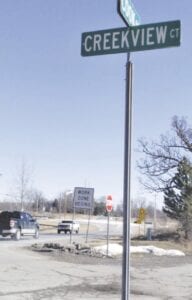 GRAND BLANC TWP. — Residents of one Grand Blanc Township neighborhood say proposed updates to the township’s Master Plan could destroy the quality of life in their quiet cul de sac.

The residents live off Cook Road, not far from the Dort Highway extension, where the Master Plan calls for rezoning some of the neighboring property near the highway to community commercial from low-density residential.

“We and our neighbors don’t want to smell grease from a fast food restaurant or gas from a gas station; we don’t want the noise, traffic or lights from medical offices or other development,” said Erin Janetsky, one of several residents who spoke before the township board of trustees last week.

Janetsky said such development would negatively impact property values and disrupt the contentment of the neighborhood.

Residents said they invested in their properties because of the natural setting, where deer and wild turkeys often can be seen, and convenient access to nearby resources.

“It doesn’t seem necessary to take a very small, lovely residential area and impose the commercial noise and other sorts of undesirable effects that that’s going to have on our neighborhood,” said resident Karen Debruyn.

“There are plenty of other areas where commercial ventures can be expressed. There is a lot of area to the north on Dort Highway, a lot of area on Holly Road. The change in that zoning … (will) detrimentally affect our life.”

Township Supervisor Scott Bennett offered some reassurance, saying the six new members of the board of trustees are taking a close look at the plan.

“It’s been kind of a perfect storm having two boards, one on their way out, the other on their way in,” Bennett said, referring to the results of the November election which seated six new board members. “This board weighed in at one of the first meetings we had and said let’s slow down this train a little bit, we want to take a look at this thing.”

Bennett said township officials had heard rumblings that some residents weren’t happy with some of the changes.

“It’s not just the residents who spoke here this evening, but we’ve had a number of developers also tell us they’re not happy with the way their property was listed in the future land use map,” he said.

Bennett said the board’s desire to “take a deeper dive” into the details of the plan are no reflection on the steering committee or the planning commission that crafted the document.

Trustee Joel Feick agreed that the planning commission did a fine job authoring the updates, but missed the mark with regard to the Cook Road area.

“I used to live off Cook Road,” he said. “I’m very familiar with the area. It’s all residential from beginning to end. Commercial doesn’t make sense to me.

“Obviously, the planning commission put some thought into this. But I can’t understand why they’d (recommend rezoning), especially in light of the residents who live there saying they don’t want a gas station, don’t want whatever.”

Jill Bahm, a planner with consultants Giffels Webster, pointed out that the Master Plan is a long-range blueprint for managing growth.

The changes don’t have to happen immediately, and the plan can provide a recommended timeline for change, she added.

“Think about the viability of that area when the Dort Highway extension is complete and there is more traffic in that area,” Bahm said. “Is low-density residential going to be desirable? Will people still want to live on that corner with that kind of traffic around it and, if not, then what else would be an appropriate designation for that.”

The township has long relied on strong standards for mitigating the impacts if and when commercial development pushes up against residential zoning, she said. Landscaping, screening and other buffering requirements help minimize disruptions such as lighting, noise and traffic.

Bennett said the township board will continue to discuss the issue before giving its final stamp of approval on the updated Master Plan.