Resolving to unplug from devices 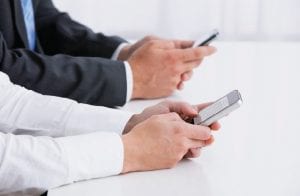 Many people now spend ample time each day texting, posting to social media and watching videos on their smartphones. Devices such as phones and tablets might play big roles in many peoples’ lives, and few may realize just how much time they’re spending on their devices.

According to Nielsen’s Total Audience Report, Americans aged 18 and older now spend more than 11 hours a day watching television, listening to the radio or using phones and other electronic devices. Common Sense Media, a nonprofit focused on assisting people in navigating the world of media and technology, notes that American teens and tweens spend about nine hours using media for enjoyment. Research conducted by Silentnight, a United Kingdom-based bed and mattress company, found that mobile phone usage, at eight hours and 41 minutes per day, in the UK has now exceeded the amount of time people spend sleeping. Sleep experts warn that constant exposure to electronic devices is contributing to poor sleep and can have other negative effects on a person’s health.

Cutting back on electronic device usage can prove challenging. However, with some patience and practice, it is possible to wean off devices without digital withdrawal symptoms.

• Keep tech devices out of the bedroom. Make bedrooms device-free zones so they don’t disturb sleep. Various studies have found the blue light emitted from phones and other electronics can wreak havoc with the body’s natural circadian rhythms, reducing melatonin production and causing the body to think it’s daylight. Turn off devices at least 60 to 90 minutes before bed to give the mind time to wind down.

• Reach for a book. When a diversion is needed, grab a book or another reading material. Keep magazines, traditional books instead of e-books and newspapers at the ready.

• Turn off notifications. Eliminate pop-ups and audible sounds. Check posts and emails on your own schedule.

• Delay turn-on times. Push back the time that you first turn on a phone or another electronic device by a couple of minutes per day.

• Set limits. Establish a schedule when devices can and cannot be used in the house, enforcing this schedule strictly. When not on devices, get outdoors or engage in physical activity.

A popular new resolution is to cut back on the amount of time spent using electronic devices. This can reduce dependence on technology and help improve overall health as well.