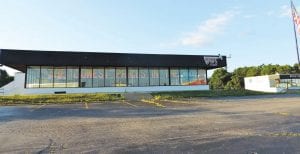 Site plans approved last week by the Planning Commission are for a restaurant/ retail development on Miller Road that includes a Texas Roadhouse. The site is currently occupied by a former used car dealership, which closed around the first of the year.

FLINT TWP. — A Texas Roadhouse restaurant wlll anchor a new retail development on the site of the short-lived Jim Waldron used car dealership, 4140 Miller Road, which previously operated as Genesee Valley Chrysler-Dodge-Jeep-Ram and for many years prior to that as Chinonis Chrysler Plymouth Dodge.

A spokesperson for developers – DA Real Estate Group of Southfield – said two dealership structures currently occupying the five-acre site would be razed. All-new construction on the retail development is expected to begin in early September and be completed by the end of they year. The timetable on the Texas Roadhouse portion will be determined by the Louisville, Kentucky-based chain, which currently has 420 locations in 48 states and four international locations, according to a Fact Sheet on the corporate website. A spokesperson said they are targeting a spring construction start and June 2015 opening. 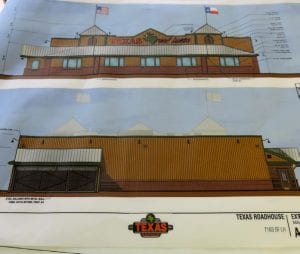 Texas Roadhouse is a steakhouse known for its hand-cut steaks and Western-themed decor. Its restaurants average 5,000 guests, and 300,000 meals per day, according to the fact sheet. The average size of a Texas Roadhouse is 6,700 to 7,500 square feet which seats 291 guests.