Retail CEO returns to his roots to open new store 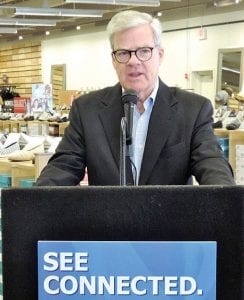 Michael MacDonald, CEO of the national shoe chain, grew up in Flint and made a special appearance at the opening of his hometown store.

FLINT TWP. — It is not typical for a busy CEO to attend openings of new stores but for Michael MacDonald, president and chief executive officer of Columbus-Ohio based Designer Shoe Warehouse (DSW), attending the grand opening last week of the new store at 4135 Miller Road, was a homecoming.

MacDonald grew up in Flint, lived on Miller Road from birth until about age 20, graduated from St. Matthews High School (replaced by Powers circa 1970), and spent his formative years working in his father’s retail business – MacDonald’s Furniture on Linden Road.

MacDonald presided over the ribbon cutting for the Miller Road store, along with DSW personnel, Flint Township officials and members of the Flint & Genesee Regional Chamber of Commerce.

It’s DSW’s 10th store in the Detroit area, 18th in Michigan and 436th of stores the chain operates in 34 states.

“We are a pretty big company,’’ MacDonald said.” As a consequence, I don’t get to many store openings,’” 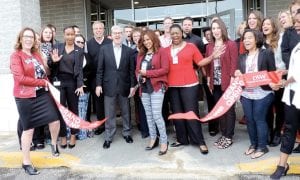 He said that makes it special to open a store in his hometown.

“I have many fond recollections of growing up in Flint, of maturing in Flint and getting a great education in Flint that stood me well over the years,” he said. “I have worked for a lot of retailers over the yeas but it seems none of them had operations in the Flint area.”

His siblings still live in the Flint area.

MacDonald joined DSW in 2009 after stints with ShopKo, Carson Pirie Scott & Co, Saks and Dayton-Hudson among others.

DSW has been in business some 25 years but is arriving in Flint Township now because the right location opened up, MacDonald said of the 20,000 square foot store in Pirates Plaza, formerly Border’s Bookstore.

“It is important for us to get the right location, the right visibility and the right co-tenancy,’’ he said. “We like being with Ulta (a cosmetics store that opened in the plaza last year).”

“If we are going to put one store in a community, we want the right location so we had to wait for it.”

Elaborating on DSW’s inventory of 20,000 pairs of shoes, MacDonald wasn’t shy about sizing up the competition.

“This (DSW) is 20,000 square feet. What that mean is we have a lot more to choose from than almost any shoe retailer you can visit,’’ MacDonald said. That’s about 2,000 choices and 20,000 pairs of shoes for men, women and children. The stores also carry accessories including scarves and purses.

“We think you will find what you want,’’ MacDonald said, adding that all inventory is out on the sales floor or can be ordered from a vast companywide inventory, if a size or color is not in stock.

DSW shoes are priced at 25 to 30 percent off manufactured suggested retail prices every day, which means not having to wait for a sale, he said. Veteran DWS shoppers also know to check out the clearance section at the back of the store.

Along with other township officials, Supervisor Karyn Miller was on hand to say a few words of welcome.

“This is an incredible investment in this region,’’ said DeAndra McCain, also of chamber member services. “To see this beautiful store in Flint Township just means the region continues to grow and create jobs here.”