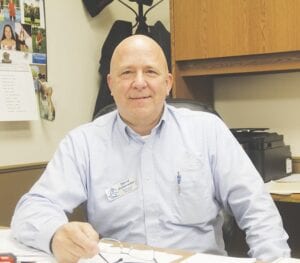 BURTON — “To provide shelter and adoption of companion animals, reduce over-population, extend humane education, prevent cruelty and provide those services that promote its goals and policies.”

When David Schmieder II became executive director of the Genesee County Human Society, he had those words, the Humane Society’s mission statement, placed on the wall above his desk.

Schmieder, 54, a retired lieutenant from the Genesee County Sheriff’s Department, was named executive director of the Humane Society, 3325 S. Dort Hwy., on March 1.

Though he might be new to the executive director’s position, Schmieder is no stranger to the Humane Society.

Following his retirement from the sheriff’s department in 2011, he said he began working at the Humane Society as a cruelty investigator and later became head of building a grounds at the facility.

When the former executive director left, Schmieder said he decided to apply for the position. Out of more than 140 applicants, he said he was offered the job and accepted.

Schmieder said he has loved animals his entire life, having adopted two dogs, a cat and a ferret from the Humane Society since he began working there.

“I’d been here three months, working cruelty investigations and I picked up a stray dog while I was out one day. He was a brown lab and he rode around with me all day,” he said. “When I brought him back here to have him signed in, I told him to sit and he sat right down for me. That was all it took.”

He said the next thing he did was send a photo of the dog home to his wife who responded saying the lab was “cute” and she asked if he had a name.

“It’s about to become Schmieder,” he laughed. He proceeded to adopt the dog immediately after that.

Schmieder said his top priority right now is to get the Humane Society through the COVID-19 pandemic. Then, he said he will continue with the mission as stated on that sign above his desk.

He said he wants to work more closely with the Chambers of Commerce throughout Genesee County and to get the organization involved in “every event possible” to secure support and find loving families for the animals.

“We will carry on the mission for the animals,” said Schmieder, “to find a home for every homeless animal.”

During the pandemic, he said the Genesee County Humane Society was shut down for about two months. During that time there were no animals brought in and none adopted out, though staff continued to come in and care for those animals housed at the facility.

Now reopened, the Humane Society still is waiting for restrictions to be lifted so it can operate as it did before the pandemic. Schmieder said there is a real need to get back to holding fundraising events and applying for grants to replace lost revenue during COVID-19.

“When we were shut down for two months, that was tough on me,” he said. “The board took care of us, but I didn’t like not being able to work.”

He said it’s a matter of getting the public back into the shelter and to restore fundraising to what it was before COVID-19 hit.

Schmieder started his career in law enforcement as a police officer in Genesee Township before joining the Clio Police Department in the early 1990s. From there he went on the Genesee County Sheriff’s Department where he served until his retirement

Schmieder said he will continue to press on through COVID-19 until he can get the Humane Society back to some semblance of normal. Along the way, he said he is looking forward to the challenges ahead.

He also thanked the Humane Society board of director for their support and for all they do for the animals, the staff and the volunteers.

“Working here has never felt like a job to me,” he said. “From day one this has always been a cool place to be.”