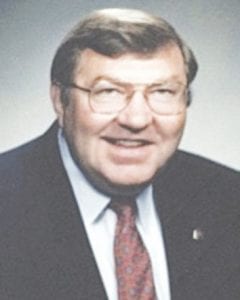 Tunnicliff, 80, passed away peacefully at home with his family on May 14 after a long battle with Parkinson’s Disease. A private funeral mass for Tunnicliff will be held at St. Robert Bellarmine Catholic Church in Flushing and a public celebration of his life will also be scheduled for a future date.

Tunnicliff was born in Detroit on Jan. 30, 1940, the son of Frank and Helen (Tamm) Tunnicliff. He grew up with his three brothers (Jack, Frank and Jim) in Ferndale and graduated from St. James Catholic High School in 1958, where he was a standout football, basketball and baseball player. However, Tunnicliff’s greatest accomplishment was meeting his high school sweetheart, Margaret (Altermatt) Tunnicliff, whom he married on August 1, 1959, and loved dearly thereafter.

Tunnicliff attended the University of Michigan on a football scholarship. Upon graduating with a degree in education in 1962, he had earned three varsity letters as a fullback wearing the Maize and Blue. Tunnicliff earned Academic All-Big Ten Honors in 1961 and was selected to play in the Senior Bowl and Blue-Grey Game his final year. He was then drafted by the Chicago Bears but played only briefly, choosing a future path that would impact countless students and educators.

Tunnicliff began his 45-year career in public education in 1963 as a high school social studies teacher at Jackson High School. He then later moved to the same role at Bloomfield Hills Andover, where he taught and coached football and golf for four years. Tunnicliff’s teams won a regional championship in golf and back-to-back league championships in football.

Tunnicliff retired from Flushing Community Schools in 2000 after serving as superintendent for 16 years. His service to the school and community will always be remembered by those who pass by the William H. Tunnicliff Auditorium at Flushing High School.

Upon retirement, Tunnicliff served urban school districts across Michigan for seven more years as a Legislative Liaison for the Middle Cities Education Association. He was inducted into the Michigan Association of Superintendents and Administrators Hall of Fame in 2008, as well as the Battle Creek Central H.S. Hall of Fame in 2016.

Tunnicliff was known as a staunch advocate for children and was highly regarded as a man of character and integrity by his colleagues. He is also being remembered as a man of faith and family, setting an extraordinary example for his family as a loving husband, father, and “papa” up to his last days.

Memorial contributions can be made to the William H. Tunnicliff Memorial Scholarship Fund for students blessed with autism at Flushing Community Schools. — B.G.