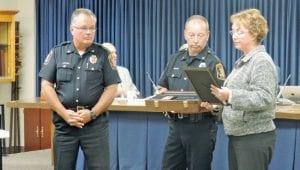 FLINT TWP. — Retired police officers, family and friends attended the township board meeting Monday night to bid a fond farewell to Officer Joel Jeakle, who is retiring after more than 17 years of service.

Police Chief George Sippert formally presented him with his framed service revolver and badge. Township Supervisor Karyn Miller read a board proclamation and Jeakle’s mother-in-law presented a special memory book she compiled in his honor. The ceremony ended with a special cake.

Officer Jeakle is the second longterm officer to retire this year, creating an opening for a new hire.

Sippert said Jeakle began his career as a township officer circa January 1997 and immediately started training at the Lansing Police Academy. He graduated three months later then began the Field Training program, which he completed in September.

Jeakle worked most of the time as a patrol officer, assigned to various shifts, “doing the important and often unappreciated work of a first responder,” Chief Sippert said.

Jeakle also worked as a community policing officer, a field-training officer, a DARE instructor and served on the Incident Response Team.

He earned a reputation as a reliable, trustworthy officer who could be counted on in tough situations, Chief Sippert said, adding that he would be missed.

Miller read and presented Jeakle with a proclamation in his honor from the township board citing his service and dedication.

As a patrol officer, he had an integral part in the day-to-day prevention of crime, traffic safety and enforcement, investigating crimes, and responding to “911” calls for assistance, she said.

Jeakle had such a large group of friends and family in attendance at his retirement ceremony that someone quipped that he must have stopped at the bus station to pick people up.