Cavaliers get payback win over Powers 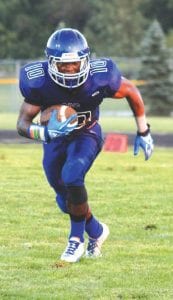 Jevonte Alexander had touchdown runs of 96 and 60 yards for Carman- Ainsworth.

Jevonte Alexander rushed for 241 yards and two touchdowns on just eight carries as the Cavaliers improved to 6-1 overall and 3-0 in the SVL-South. Carman- Ainsworth can wrap up its first Valley title with wins over Flint Southwestern and Davison in the final two weeks.

Powers won last year’s crown, thanks primarily to a 32-7 win over Carman-Ainsworth in week seven. But the Cavs turned the tables this year, dominating the Chargers from the start and taking a 28-0 halftime lead.

Alexander, who has taken over at quarterback for Connor Storms, opened the scoring with a 96-yard touchdown run late in the first quarter after Carman-Ainsworth had stopped Powers with a goal-line stand.

Alexander scored again early in the second quarter on a 60-yard run, and the Cavs made it 21-0 on Demarion Allen’s 38-yard interception return for a touchdown with 6:29 left in the first half.

Malik Seales ran in the final score from the 1-yard line with 3:38 to go in the half.

Powers never got into the end zone on offense. The Chargers scored when a high snap by Carman-Ainsworth turned into a fumble return for a touchdown with 10:08 left in the third quarter. Powers, 2-4 overall and 2-2 in the Valley, added a field goal late in the fourth quarter.

The Cavs forced a bundle of Powers turnovers, with Allen, L’Daryl Mosley and Brandon Walker all intercepting passes in the first half. Seales finished with 47 yards rushing on 11 carries, and Alexander hit 4-of-6 passes for 47 yards.