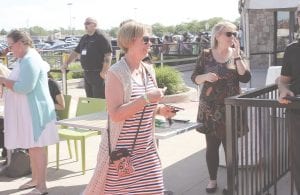 FLINT TWP. — Actor Mark Wahlberg and brother Paul, owners of the Wahlburgers restaurant chain, were at the Genesee Valley Center in Flint Township, June 23, for the ribbon-cutting and VIP party marking the opening of their 37th store. The restaurant in Flint Township is the first in Michigan outside the metro Detroit area.

“It’s amazing!” said Paul Wahlberg, who is a chef and owns the chain with his brothers. “Everyone here has been so supportive.”

“Everybody knows how much we love the Flint area,” said Mark Wahlberg. “We wanted to be in Flint. We’re excited to be here! Let’s have a party!”

After greeting fans and signing autographs, the brothers went inside to host a VIP party with local celebrities and Flint Township officials who were in attendance.

The brothers plan to open another restaurant soon in Royal Oak. — By Gary Gould 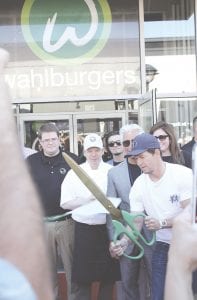 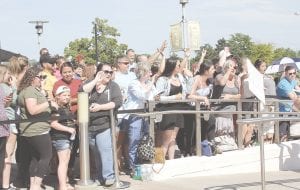 Just a sample of the crowd that turned out to catch a glimpse of Mark and Paul Wahlberg.