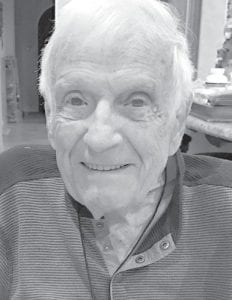 RICHARD VINCENT COOPER passed away peacefully early in the morning of Friday, February 17, 2017 with his son, Kevin and daughter-in-law, Suzanne at his side, in their home, in Valencia, CA.

Richard, “Dick”, had called the Flushing/Flint area his primary home along with his late, long-time girlfriend Margret “Marge’ Connor for the past 20 years. This past October, Dick suffered a major heart attack and was not expected to survive. Much to the surprise of his physicians, he rallied and was sent on to a rehabilitation facility. A month later, he was on a plane returning to California to be cared for by Kevin and Suzanne. He continued to progress with the excellent care of the Veteran’s Administration’s and the sincere hope that he would return to his dear and close friends in Michigan.

Dick was born and raised in Chicago, he enlisted during WW II and attained the rank of Corporal in the Army Air Corp. He worked for the Chicago Tribune and married Patricia Sale in May 1945. Together, they moved to California and made Reseda their home. Dick was the head pressman at the Herald Examiner, then a printer at Cal Roto in North Hollywood. He later became a General Contractor and enjoyed managing projects and building custom homes in the Los Angeles and the Flint area.

An avid golfer, he has to his credit a hole in one, but he would say his true claim to fame was having 7 double eagles. He had been out swinging his golf clubs just a week before his heart attack.

Dick grieved the loss of his beloved Marge, who passed away two years prior. He also loved his adopted family in the Flushing area (too many names to mention.) His greatest desire was to bereunited with them.

He is survived by his daughter, Colleen Shields of Las Vegas, NV; his son, Kevin and daughter-in-law, Suzanne and granddaughters, Kristen, Katherine, and Lauren of Valencia,

CA. He is also survived by wife, Patricia of Las Vegas, NV.

Dick was laid to rest at the San Fernando Mission Cemetery.