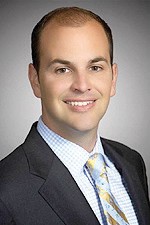 FLINT — The trustees of the Charles Stewart Mott Foundation have appointed Ridgway H. White as the fourth president of the organization, effective January 1, 2015, according to a press release. He succeeds his father, William S. White (Bill), who remains chairman and CEO.

“It’s the right time and the right approach for the evolution of the organization,” said Bill

White, who has been president of the Foundation since 1976, CEO since 1979 and chairman of the board of trustees since 1988. “The Foundation is in excellent shape. Our people, our programs and our assets are all strong, and we’re poised to continue our work to promote an equitable and sustainable society.”

As president, Ridgway White will bring to the Foundation an entrepreneurial spirit gleaned from 10 years of experience in guiding revitalization efforts in downtown Flint.

“I’m honored to have the opportunity to continue the foundation’s legacy of service to the people and communities we support,” he said. “And the strength of our team at Mott gives me great confidence in our ability to make a difference. At every level, our staff members are talented, committed professionals who know their topic areas and care so much about the work we do together.”

Ridgway joined the Foundation in 2004 as a program assistant on the Flint Area grantmaking team. He was named an associate program officer in 2006 and was promoted to program officer in 2009. In that capacity, he also served as a loaned executive to the Uptown Reinvestment Corporation, a nonprofit focused on revitalizing downtown Flint. In 2011, he was named vice president for special projects at Mott and chair of the Foundation’s management working group.

He has been a driving force behind public-private partnerships that have resulted in the redevelopment of vacant and underutilized buildings and properties, creating an environment that has helped to attract new business to Flint.

He also has played a key role in bringing the city’s new Health and Wellness district to fruition. To date, that project includes: an expanded presence for Michigan State University’s medical school and public health program in Flint; the redevelopment of the Flint Farmers’ Market as a 55,000-square-foot, multi-use facility and its return to a central, downtown location; and the new Genesys PACE Center, which will provide all-inclusive care for seniors with chronic health conditions. Thus far, the $35 million project has resulted in the redevelopment of four blocks in the downtown area.

In his work outside of the Foundation, Ridgway took it upon himself to launch a $36 million dollar project to build two schools that would share one campus in the city of Flint. The project resulted in a new state-of-theart home for the Michigan School for the Deaf, which is operated by the state of Michigan, and Powers Catholic High School, the only private high school in Genesee County. In all, Ridgway has developed more than a million square feet of mixed-use real estate.

“It’s more than just a logical progression,” said Bill Piper, who has served on the Foundation’s board of trustees since 1985. “It’s also the perfect fit. Ridgway brings the kind of passion and dedication to Flint that his great-grandfather Charles Stewart Mott demonstrated. And that will always be an important part of the Foundation’s work.”

Ridgway is a graduate of Hobart College, where he studied architecture, economics and urban planning. He also serves on several nonprofit and for-profit boards, some of which include the National Center for Family Philanthropy, Michigan Magnet Fund, Isabel Foundation, Flint Cultural Center Corporation, United States Sugar Corporation, and Ayablu, a licensee of Burt’s Bees doing business as Burt’s Bees Baby. — R.S.